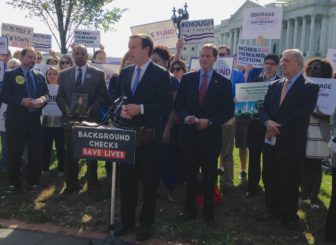 Sen. Chris Murphy talks about a bill to tighten background checks on gun purchasers. Behind him is Sen. Richard Blumenthal.

Washington – Sen. Chris Murphy on Wednesday reintroduced a background-check gun bill he’s been trying to make law since a gunman killed 20 first graders and six educators in Newtown at the end of 2012.

Nearly five years later, Congress has yet to approve a substantive gun control measure, even the least controversial of those gun control advocates have proposed – a bill that would expand FBI background checks of gun buyers.

Murphy’s bill, co-sponsored by Sen. Richard Blumenthal and 27 other senators but lacking any Republican support, would close the “gun show” loophole, which allows gun sellers at these events to avoid running information about potential buyers through the FBI’s National Instant Criminal Background Check System, or NICS.

The “Background Check Expansion Act” would require background checks for all sales, including online purchases and those collectors make out of their homes.

Private sellers would be required to visit a licensed firearms dealer to run the NICS check before a gun sale is finalized.

The bill would exempt from background checks sales between law enforcement officers, temporary loans of firearms for hunting and sporting events and gifts of a firearm to an immediate family member or for immediate self-defense.

Murphy initially tried to negotiate the background check bill with Republicans who would support it.

But on Wednesday he said, “We made a strategic decision to introduce a strong bill.”

“We would have had to water it down to get Republican support,” he said.

He also said the legislation is a “platform” that could be altered to win GOP backing.

On Wednesday Murphy, Blumenthal and other bill sponsors joined gun violence victims and gun control advocates to introduce the bill at a press conference on the U.S. Capitol grounds.

Murphy said mass slayings, such as the one that claimed 58 lives in Las Vegas on the night of Oct. 1, are a uniquely American phenomenon. One reason is the loopholes in the background check system, he said, and stronger federal laws are needed.

“Even if you have strong gun laws in a state, like Connecticut, you are not immune to these loopholes,” Murphy said.

He said criminals can “buy a truck full of weapons” in a state with lax gun laws and drive them anywhere.

Murphy also said terrorist groups like ISIS and Al Qaeda are telling followers to buy weapons at gun shows. “They found out they could get them without a criminal background check,” Murphy said.

But when asked if he thought the background check bill would be approved by this Congress, which is controlled by the GOP, Murphy said, “I never say never, but I’m not naive.”

“I understand we are in this for the long haul,” Murphy said.

“We are here for the long haul, for the marathon, not the sprint,” Blumenthal said.

Blumenthal also said he hoped for a hearing in the Senate Judiciary Committee on a bill that would outlaw “bump stocks,” a device used by Las Vegas shooter Stephen Paddock that allows a rifle to fire like an automatic weapon.

But the National Rifle Association has quashed the chances Congress would approve that bill. The gun rights group insisted it supports regulations on bump stocks, but believes any ban should come from the Bureau of Alcohol, Tobacco & Firearms — not Congress.

The NRA has also said it opposes a bipartisan House bill that would ban bump stocks.

While expanded FBI background checks might not have prevented Paddock from accumulating his large cache of weapons, Tom Mauser said it might have saved the life of his son Daniel, a victim of the 1999 Columbine High School massacre in Colorado.

Mauser said Daniel had asked him at the dinner table about two weeks before the shooting, “Do you know there are loopholes in the Brady Bill?”

Mauser said he responded that he didn’t, and thought little of the brief exchange until he found out some of the guns used by the Columbine shooters were purchased at gun shows so there would be no “paper trail” to the buyers.

Mauser said he took a one-year leave of absence from his job to lobby the state assembly to pass a bill that would close the gun show loophole, but failed to win enough support.

A ballot referendum on the issue, however, received overwhelming support and the state tightened its background check law. Oregon followed with a similar referendum.

“People got it,” Mauser said. “But we shouldn’t have to be doing this state by state.”