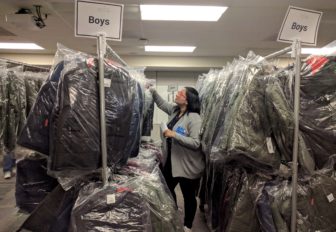 Shalimar Ramirez, the cordinator of services for homeless students in Hartford’s Public Schools, organizes the coats that will be given to homeless and displaced children attending city schools.

Most of them – 85 percent – showed up in the state’s lowest-achieving districts, which already are grappling with high concentrations of high-need students.

The State Department of Education Monday surveyed each district’s homeless and displaced student cordinator to gauge influx. Only half of Connecticut’s districts responded, though all the communities that have historically had large numbers of Puerto Ricans did respond.

There is no dedicated pool of money for the increased students, but districts can include students who enrolled by the end of October in their official enrollment counts provided to the state. The state’s primary education grant – the Education Cost Sharing grant – typically uses those figures to determine future state-funding levels.

Shortly after Hurricane Maria touched down in Puerto Rico and it became apparent that the recovery would take some time, Gov. Dannel P. Malloy reminded district leaders of their obligations under federal law to immediately enroll displaced and homeless students and provide free lunch, even if the students are missing the appropriate paperwork.

The state education department is now working on follow-up guidance to districts on their obligations to provide the special education services these students may need. The schools also will be given guidance on how to ensure students get services even if their legal guardian did not move with them.