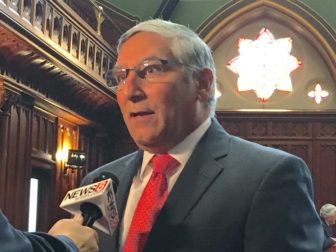 The Senate voted unanimously Tuesday to fix a series of technical issues in the new state budget, including a flaw with the new hospital provider tax increase.

But while there was bipartisan agreement on this vote, Democratic and Republican Senate leaders held different opinions on when the legislature should act to fix a $178 million revenue shortfall in the current fiscal year — a problem first identified Monday by Gov. Dannel P. Malloy’s administration and by nonpartisan analysts.

“I think it’s good that the (Malloy administration) and the hospitals were able to come to terms” on the hospital tax, Senate Republican leader Len Fasano of North Haven said, adding he is confident this legislation — which the House is scheduled to consider Wednesday — would solve the disagreement between those two groups.

“We are grateful that legislative leadership came to recognize the need to fix the language for implementing the hospital supplemental payments and provider tax,” Malloy spokeswoman Kelly Donnelly said. “The adopted language was fundamentally flawed and violated federal law, and the action by the Senate today makes the law workable.”

Donnelly added that the new hospital taxing arrangement still is conditional upon approval by the U.S. Centers for Medicare and Medicaid Services.

“We want to thank the state Senate for passing legislation that will benefit Connecticut communities, hospitals, and the patients they serve,” Connecticut Hospital Association CEO Jennifer Jackson said. “We look forward to passage in the House and working with the administration to implement the measure.”

The hospital tax is a complex legal and fiscal maneuver designed to increase federal  Medicaid reimbursements to Connecticut. Every state but Alaska imposes some form of a health provider tax.

Connecticut collects taxes from hospitals and nursing homes and then redistributes a portion of those receipts back to those industries.

The return of these funds then triggers a federal Medicaid reimbursement.

After a nine-month battle over a new state budget — that extended four months into the new fiscal year — legislators reached a bipartisan deal in late October that included a hospital tax hike. But because of increased state payments back to the hospitals as well as additional federal reimbursements, lawmakers said both the state and the industry would gain under the deal.

Malloy signed the budget on Oct. 31, but used his line-item veto to stop implementation of the hospital provider tax, saying the language was flawed and would not pass muster with federal officials — and might cost Connecticut hundreds of millions of dollars in federal funds.

The bill that passed 34-0 in the Senate on Tuesday also made technical adjustments to  a rental rebate program municipalities provide for low-income seniors, an income tax deduction related to Social Security, a bonding issue identified by the treasurer’s office, and the public financing system for state elections.

The administration said the original budget technically left it with no legal way to distribute the $13 million in funding for the rental rebate program to cities and towns.

But Senate leaders had mixed opinions Tuesday about how to deal with a new problem tied to the bipartisan budget.

The governor’s budget office and the legislature’s nonpartisan Office of Fiscal Analysis reported jointly Monday that eroding revenues have opened deficits topping $175 million this fiscal year and nearing $150 million in 2018-19.

Fasano said he wants to analyze the report in greater detail, noting that close to half of the problem for this fiscal year involves federal Medicaid payments. “I want to look at that as to why it’s such a larger number,” he said.

Regardless, though, Fasano added that his preference is for the legislature to deal with this before the regular 2018 General Assembly session begins on Feb. 7.

“It’s going to be tough to do,” he said, adding that he’s hopeful that bipartisan talks that ended the most recent budget impasse could be repeated. “I think what we showed is when we look together we usually can accomplish a goal.”

But Senate President Pro Tem Martin M. Looney of New Haven, the top Democrat in the chamber, said he prefers to take a wait-and-see approach.

“We have a bipartisan budget that does reflect the consensus of the General Assembly,” Looney said. “But obviously, as we have in other years, we will be monitoring the situation closely.”

Looney added that the revenue shortfall of $178.1 million still represents less than 1 percent of the General Fund. The 1-percent mark is a trigger that requires the governor to prepare a deficit-mitigation plan.

“I think February’s not that far away now since we’ve been in session all fall,” said Looney, adding lawmakers would have more data on the budget by waiting until that point.

Looney added he would be willing, “if need be,” to begin legislative negotiations in January to discuss options to mitigate any deficit shortly after the session begins.

Consensus reports analyzing revenue trends are required by law three times annually. The next two reports are due on Jan. 15 and April 30, respectively.