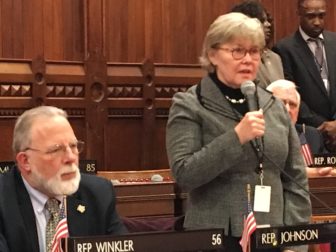 The House of Representatives overwhelmingly gave final approval Wednesday to a measure fixing technical flaws with the hospital tax, a renters’ rebate program and other aspects of the new state budget.

The House voted 123-12 to adopt the bill, which the Senate approved unanimously on Tuesday. Gov. Dannel P. Malloy is expected to sign it.

The hospital tax is a complex legal and fiscal maneuver designed to increase federal  Medicaid reimbursements. Connecticut collects taxes from hospitals and nursing homes and then redistributes a portion of those receipts back to those industries.

Because of increased state payments to the hospitals as well as additional federal reimbursements, lawmakers said both the state and the industry gain under the deal.

But Malloy, who signed the budget on Oct. 31, used his line-item veto to stop implementation of the hospital provider tax, saying the language was flawed and would not pass muster with federal officials.

The U.S. Centers for Medicare and Medicaid Services, commonly referred to as CMS, still must approve the new arrangement before it can be implemented.

“The final language that was delivered to the governor’s desk today is a positive development that will enable the administration to proceed without delay in our amended submission to CMS,” Malloy spokeswoman Kelly Donnelly said. “We are grateful for the leadership in the House and Senate for recognizing Governor Malloy’s concerns about the flawed hospital supplemental payment and provider tax language that was included in the adopted budget bill, and their agreement to quickly come in and rectify it to make the law workable.”

But another component of the repair bill did spark some debate Wednesday in the House.

The Malloy administration said the original budget technically left it with no legal way to distribute the $13 million in funding for the rental rebate program to cities and towns, which in turn pass that assistance on to low-income seniors.

And while this measure corrects that flaw, some lawmakers noted the new budget also requires towns to assume $8.5 million of renters’ rebate program costs.

Rep. Michael Winkler, D-Vernon, who voted against the repair bill, said it was unfair to drop this burden onto communities, which already waited four months into the new fiscal year for a state budget.

And Rep. Susan Johnson, D-Windham, said the budget unfairly distributes this $8.5 million burden among municipalities, giving no discount to communities that already have the most low-income households. Windham ranks second, per capita, in this category, behind only Hartford.

“I’m quite upset that we don’t any proportional cost-sharing going on here,” said Johnson, who voted for the repair bill, but warned she might oppose future state budgets that don’t address this inequity. “If we don’t do something about this you won’t have my vote next time.”

“Let’s be honest about the fiscal climate of this state,” she said.