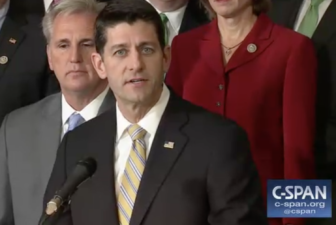 Washington – The U.S. House on Thursday approved a wide-ranging overhaul of the federal tax code that will lower taxes for many in Connecticut, while hiking them for some, especially in middle-class tax brackets.

The bill was approved on a 227-205 vote, with not a single Democrat supporting the tax plan and with 13 Republicans voting against it too.

The bill would shrink the number of tax brackets from seven to four, and raise the lowest bracket from 10 percent to 12 percent.

The bill also would eliminate most deductions, including those for state taxes and for medical expenses. Property tax deductibility would be capped at $10,000, and the student loan interest deduction would be gone.

Besides Rep Walter Jones, R-N.C., who had concerns about the bill’s impact on the debt, all of the Republican “no” votes came from other high-cost states — New York, New Jersey and California.

The Internal Revenue Service says 41 percent of Connecticut taxpayers currently itemize deductions, but with most of them gone, many may choose to use the standard deduction.

The bill also would expand the child tax credit – from $1,000 to $1,600 per child – and establish a new, $300 credit for each non-child dependent, such as older family members. But the personal exemption, now $4,050 for individuals and each person in their family, would disappear.

“I voted ‘no’ today because this bill is just plain wrong for Connecticut,” said Rep. Elizabeth Esty,D-5th District. “We need real tax reform. Our tax code is too complicated, and we need to put more money in the pockets of middle-class families. But this bill does none of that.”

Esty said the bill would hurt “homeowners, people with steep medical bills, veterans, and just about everyone but the wealthiest people in America.”

The Institute for Taxation and Economic Policy said 305,000 Connecticut households earning less than $197,000 would see a tax increase under the bill. Most of them are earning at least $75,000.

Rep. Joe Courtney, D-2nd District, said the “obliteration” of the student loan interest deduction, would add $24 billion to the cost of higher education.

“(The bill) moves this country in exactly the wrong direction to close the skills gap in our workforce, which we all know every member in this body has heard about from employers back home,” Courtney said.

The proposal also would scrap the alternative minimum tax (AMT) that nearly 100,000 Connecticut filers paid in 2014. The AMT was designed to prevent wealthy people from avoiding federal tax entirely through deductions and credits.

The GOP bill would lower the top corporate tax rate from 35 percent to 20 percent in an effort to prod multinationals to move their offshore operations back to the United States.

But critics say corporations are flush with cash now from large profits and low interest rates and yet they are not investing.

“This is a remarkable day for the corporations and the wealthiest of Americans. However, if you are a hard-working, middle-class family, not so much,” said Rep. John Larson, D-1st District.

Larson said a couple in the greater Hartford area with a child in college could see a $1,667 tax increase in 2023, and a recent college graduate will not be able to write off their student loan interest payments.

“How does this incentivize the young, middle-class family to purchase a home and raise a family? It doesn’t,” Larson said.

The tax bill could help many small “pass through” businesses in the state.

Instead of getting taxed at an individual rate for business profits, people who own their own business or work as consultants would pay taxes at a new “pass-through rate” of 25 percent. But there would be some restrictions on the kinds of businesses that would be able to claim this rate, to avoid individuals abusing the lower tax rate.

The Joint Committee on Taxation (JCT) estimated that the bill would lower federal revenues by about $1.4 trillion over 10 years. The GOP budget framework only allows lawmakers to add $1.5 trillion to the deficit in that time period.

The Senate is working on its version of the bill, which would differ in several ways from the House-passed bill.

The deductibility of the property tax would be entirely eliminated in the Senate bill, but the medical deduction would be kept.

While the House bill ends the deductibility of alimony payments, the Senate bill would not.

The Senate bill also would make the reduction of individual tax rates temporary, but make business rate cuts permanent. And it would repeal the Affordable Care Act’s mandate that individuals purchase health insurance.

The Senate plans to vote on the bill after Congress’s Thanksgiving break. If it is approved, it would be reconciled with the House bill and both chambers would be required to vote again on a final tax bill.