How do you want to die? Write it down … 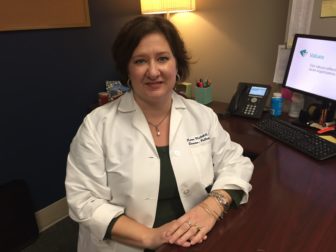 How we die can be a very complicated and emotional topic. But there are ways to make it easier on yourself and your loved ones, including writing down the type of care you want to receive at the end of your life.

The group includes representatives from hospitals, state agencies and insurance companies, as well as long-term, home, hospice and palliative care. The group has a website and held an event in April that drew more than 100 practitioners, patients and advocates.

Karen Mulvihill is the group’s co-chairwoman, and as a nurse practitioner and the director of palliative care services at Western Connecticut Health Network, she sees families struggling every day over the care they believe their loved one would want, especially if that sick person is not able to speak for himself or herself.

In this Sunday conversation, the Mirror sat down with Mulvihill to get her thoughts on Care Decisions Connecticut and end-of-life planning.

Why is Care Decisions Connecticut needed?

Only about a quarter of our population actually has an advance directive. Working in palliative care, the challenge really comes up when patients come into the hospital, they’re seriously ill and they don’t have their wishes known to their family members.

Now we’re having to have a conversation with them about what are your wishes now that you have a serious illness. Do you want us to be aggressive? Do you want us just to focus on your comfort?

When the patient can speak for themself, that’s great because we can take that and go with it, but when they can’t, the patient’s voice can’t be heard and the family assumes they know what they want for the patient, but they don’t always know that. Also, there’s discord among family members a lot of times as well.

Having a piece of paper with their wishes written in their handwriting signed by them is something concrete to take to the family … so it is really a gift to families.

What is an advance directive?

In Connecticut, an advance directive consists of two documents. One is a living will, and the living will is your wishes under three different conditions: if you’re terminally ill, if you’re permanently unconscious, or if you’re in a persistent vegetative state. [The living will] asks what you’d want during those — would you want CPR? Would you want us to put in a breathing tube? Would you be okay with artificial means of nutrition and hydration? And then it has an area to talk about what other things you might not want.

Connecticut has next of kin laws as well, which say your spouse is the first person we’re going to go to, adult children, parents, siblings and it goes down from there.

Some people might not want their spouse to be their decision-maker. Maybe they’re too emotional, and they are not going to be the one that follows through on what their wishes are. So they assign somebody else. That health care representative can override everybody, as far as their wishes.

People tend to think of advanced care planning for older people who have serious illness. I have an advanced directive and I’m in my 40’s. I have one, my husband has one.

Having a piece of paper with their wishes written in their handwriting signed by them is something concrete to take to the family … so it is really a gift to families.
Karen Mulvihill
Director of Palliative Care Services at Danbury Hospital

How has Care Decisions tried to get the word out about advanced directives?

We had a kick-off event in April for National Health Care Decision Day, where we had an all day conference at CHA to talk about the importance of advance care planning.

We had a few speakers, including a family member, who went through the experience and was able to talk about the importance of having that document.

Most patients when asked want to have a discussion with their family members about their wishes at end of life but they don’t know how to start that conversation.

At that same time in April, we launched the website, which is a great site for everybody, in multiple languages, that talks about why advance-care planning is important. It talks about palliative care and hospice care and who qualifies for those. Resources are there, including links to the Conversation Project.

You said most people want to have the conversation. What advice do you give on how to start that conversation?

The best way to approach that conversation — there are many different paradigms out there for having it. There are these “death with dinner clubs.” They will go out to dinner, have a little wine, bring all the copies of the documents and talk about it with each other.

But if it’s something that’s difficult, I think a good approach is saying, “Mom or Dad, I really need your help with something. I really need to know what you would want me to do in this scenario if you weren’t able to speak for yourself.”

How do you get the younger populations to have the discussions about themselves?

That is a challenge. They think they will live forever.  I think just normalizing the conversation, and maybe pulling in technology to help may be a way to keep them engaged.  But I don’t know of anything out there like that.

What response have you gotten from your patients and their families after they completed advance directives?

Relief. They are relieved that they were able to talk about it.

Years ago, I had a couple who just could not talk to each other about their wishes. One of them had a serious illness, and it needed to be discussed. They would each talk with me, without the other present, about what they wanted.

I offered to bring them together and help facilitate a conversation about their wishes. They felt relieved to have it out in the open and were able to keep the communication going even after we completed the advance directive. I was able to use the paper as a tool to facilitate their discussion.