At center, behind the iconic East Armory, is one of the two brownstones that the National Park Service wants to turn into a visitors center at Coltsville National Historical Park.

Washington – It’s been nearly four years since Congress approved turning Hartford’s Coltsville neighborhood into a national park, and while there’s forward motion, the pace of progress has frustrated its boosters.

While the creation of the Coltsville National Historical Park has been at a snail’s pace, the National Park Service hopes to take some major steps soon, including the hiring of a permanent, full-time park ranger and the establishment of a temporary visitors center at the park that honors the innovative entrepreneurship of Sam and Elizabeth Colt.

Coltsville is managed by a similar park in Massachusetts, the Springfield Armory National Historic Site, that honors what was once the prime manufacturing center for U.S. military firearms.

Joanne M. Gangi-Wellman, the chief of interpretation at the Springfield Armory, said “there is a lot of work to be done” to bring Coltsville up to speed. 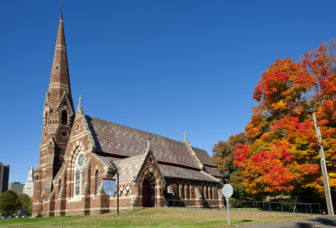 The Church of the Good Shepherd, Elizabeth Colt’s memorial to her late husband, Samuel Colt, on Wyllys Street.

“I think we’re looking at four or five years” Gangi-Wellman said of the completion of the park.

Rep. John Larson, D-1st District, who championed the idea of turning Coltsville into a national park and sponsored the legislation that would do so, said he plans to meet with park Superintendent James Woolsey next month to determine if there is anything that could speed things up.

“I’d be the first to admit this is frustrating,” Larson said of the park’s progress.

He said most of the slowdown can be attributed to the need to obtain agreements between the National Park Service, and the city of Hartford, the state and Colt Gateway, the owner of much of the Colt complex who has turned former factory buildings and worker housing into apartments and commercial office space.

Other agreements had to be reached with the Church of the Good Shepherd and the Colt residence called Armsmear, which is now a home for single women.

Larson, who calls the Colt complex “an arsenal for democracy,” said the National Park Service has “a lot of rules and regulations” that have slowed the process.

“Once you get down to the minutia of this stuff, it’s enough to give you a migraine,” he said. 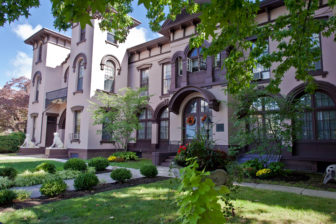 Gangi-Wellman also said reaching agreements with others has been a prime obstacle.

Those agreements included one that would allow the placing of signs that tell the Colt story in Colt Park, a 106-acre park in Hartford that is home to playgrounds, sports fields, a skating rink and Dillon Stadium.

The land for Colt Park was donated to the city by Elizabeth Colt upon her death.

There was also the need to make sure there is adequate traffic flow to the park, and a requirement to transfer land from the Coltsville developer, Colt Gateway, to establish parking at the park.

Then there is the problem of where to put the visitors center.

The legislation that established Coltsville as a national historic park required Colt Gateway to donate space in the complex’s iconic blue-domed East Armory.

“We decided ‘you know, this isn’t going to work, without interfering with the existing tenants in the building,” Gangi-Wellman said.

So, an alternative site was chosen, two dilapidated brownstone buildings built in 1855, known as the Forge and the Foundry. Both need a lot of work.

Transfer of the title to those buildings to the National Park Service is complicated and could take up to a year because it includes a review of site surveys and an environmental assessment of the grounds. 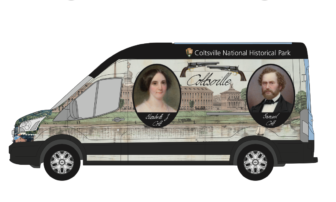 A rendering of a planned National Park Service van for visitors to Coltsville, showing portraits of Sam and Elizabeth Colt.

Once the National Park Service has ownership, it can formally establish the park.

Colt Gateway developer Larry Dooley confirmed he’s in the process of donating the brownstones to the park service, a process he called a “complicated transaction.”

The National Park Service is completing a “historic structure report” that would detail what is needed to renovate the brownstones, while keeping their historic character.

Meanwhile millions of dollars will be needed to stabilize the buildings, and millions more for their renovation.

“You can tell the Colt story in different ways,” she said.

A temporary center, in the form of an illustrated cargo van, will be parked in Coltsville, hopefully in January. And Gangi-Wellman hopes final arrangements for a permanent, full-time park ranger can be made by then, too.

In the last couple of years, a park ranger has been giving walking tours of Coltsville, but only in June through September. About 1,300 people have taken those tours.

The park service also hopes to soon set up regularly scheduled lectures about the park at the Church of the Good Shepherd.

Although he wishes the progress on the park would pick up pace, Larson said, “It’s quite unusual to get an urban national park.”