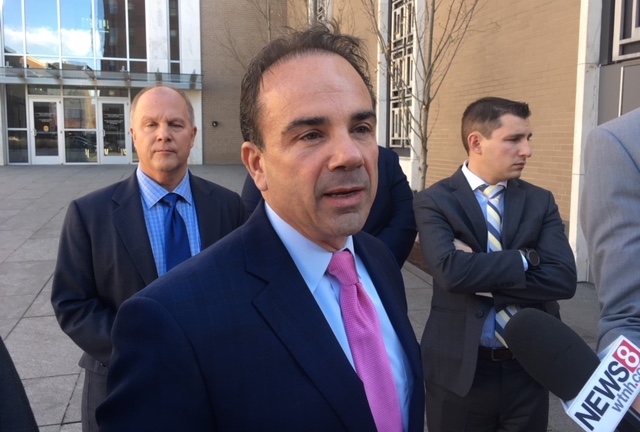 Bridgeport Mayor Joe Ganim outside the federal courthouse in Hartford.

A federal judge delivered a significant blow Wednesday to the gubernatorial ambitions of Bridgeport Mayor Joe Ganim by upholding a state law that bars Ganim, as a felon convicted of public corruption, from obtaining public campaign financing.

Ganim, 58, who served seven years in prison for his leadership role in a kickback scheme in his first stint as mayor, was uncertain about appealing the ruling to the U.S. Court of Appeals or his prospects for seeking the Democratic nomination for governor in 2018 without access to public financing.

“At the end of the day, money is a factor,” Ganim said outside the federal courthouse in Hartford. “It’s a huge factor, but it won’t be the one that determines this campaign.”

He seemed doubtful of an appeal, which could cloud his status for months. He said he expected to decide in January if he would end his exploratory efforts and go forward with a campaign for governor.

U.S. District Judge Michael Shea took a 15-minute recess after hearing arguments  from lawyers for Ganim and the State Elections Enforcement Commission, then returned to read a decision addressing the key points of Ganim’s challenge. He opened by looking at Ganim and saying, “The ruling is going to go against the plaintiffs.”

The ruling does not bar Ganim, who has raised nearly $150,000 through an exploratory committee, from running for governor, but it blocks his access to public financing that provides qualifying candidates with $1.5 million for a primary and $6.5 million for a general campaign for governor.

To qualify, a candidate must raise $250,000 in contributions of no less than $5 and no more than $100, with 90 percent of the money coming from in-state donors. No grants are payable until a candidate wins the nomination or a place on the ballot for a primary, either by petitioning or winning 15 percent of the vote at a nominating convention in May.

Non-participating candidates can accept maximum contributions of $3,500 from individuals and $5,000 from political action committees.

Ganim is one of five Democrats to raise significant funds in preparation for a potential campaign to succeed Gov. Dannel P. Malloy, who is not seeking re-election. Ganim was convicted in 2003 after a dozen years as mayor, left prison in 2010 and successfully ran for mayor in 2015.

“We are very pleased with Judge Shea’s decision,” said Michael Brandi, executive director and general counsel of the State Elections Enforcement Commission. “The attorney general’s office, working with our staff, did a fantastic job. We look forward to working with Mayor Ganim going forward on his candidacy for higher office.”

Shea complimented Ganim for trying to make a new start.

“Nothing in my ruling is intended to diminish the value” of an ex-convict seeking second chances and succeeding, Shea said. “I know that’s a difficult thing to do. I certainly compliment him on his recent election success.”

There were no disputed facts, leaving Shea to make a ruling based on arguments about the law, both in extensive briefs filed before the hearing and in oral arguments Wednesday before the judge.

At issue was the validity of a law passed in 2013 that bars anyone convicted of a crime in relation to public office from participating in the state’s voluntary Citizens’ Election Program, which provides public financing for qualifying candidates for state office who agree to limits on spending and contributions.

Ironically, the law was passed in response to the prospect that another Bridgeport politician, former state Sen. Ernest Newton, would return to politics and seek public financing after a corruption conviction. Newtown campaigned with Ganim in 2015, going door to door.

Ganim claimed that the bar on felons violated his rights under the First Amendment by imposing an unfair burden on his ability to express political speech, and under the 14th Amendment, which guarantees equal protection under the law. He also complained it denied him due process, as the law provided no avenue for an administrative appeal.

Shea said he was wrong on all counts, concluding that the Connecticut General Assembly was within its rights in barring felons in certain circumstances from a program that is neither a legal right nor an advantage so great that it effectively denies anyone the ability to campaign.

Ganim sat in the front row of the courtroom as his lawyer, Louis N. George, and Assistant Attorney General Michael K. Skold, answered questions from the judge, whose skepticism of Ganim’s claims were evident. At one point, he suggested George was misreading Buckley v. Valeo, a bedrock U.S. Supreme Court decision in 1976 that struck down non-voluntary campaign spending limits, but upheld limits on direct contributions to candidates as a check against corruption.

Shea smiled and said the lead plaintiff in the case, James L. Buckley, was “my former boss.” After his graduation from Yale Law School, Shea was clerk to Buckley, who became a federal appeals court judge after leaving elective politics. 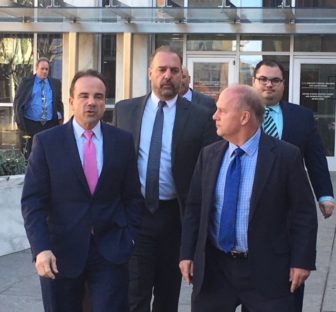 Ganim exiting the court. At center is attorney Louis N. George, who argued his case.

Ganim’s lawyers argued in a brief that allowing felons to resume public life, yet barring them from public financing, was unfair and inconsistent:

“The State has decided that felons who have finished their sentences can restore all their rights as electors, including being a candidate for public office. That is the value and state interest expressed in Connecticut’s statutes, and it is obviously a value shared by a significant number of Connecticut’s citizens, as Mr. Ganim was re-elected Mayor of Bridgeport. It is disingenuous for the State now to decide that it will place roadblocks in his path in running for Governor.”

Skold noted that states can bar felons from voting or seeking public office, even if Connecticut restores voting rights after the completion of a sentence.

“So, too, can the State reasonably decide that public corruption felons have forfeited their opportunity to obtain the discretionary and voluntary benefit of public financing for any future campaigns that the State may permit them to conduct,” Skold said in his brief. “The State need not show any more than that.”

Malloy is the first governor to be elected while participating in the voluntary program, defeating two wealthy, self-funding opponents in 2010: Ned Lamont in a Democratic primary, then Republican Tom Foley in the general election. Foley ran using public financing in 2014, when Malloy was re-elected.

All six constitutional statewide officers and the vast majority of members of the General Assembly were elected using public financing under the CEP, as the Citizens’ Election Program is known, which costs the state more than $30 million in a gubernatorial election year.

“Based on past election results and all available evidence, Mr. Ganim cannot win without participation in the CEP, or at least is much less likely to win,” his lawyer argued in a brief. “That is the only factual evidence available as to how the institution of the CEP has influenced statewide elections since the program was started.”

If he goes forward, Ganim will have to argue to donors that his lawyer was wrong.