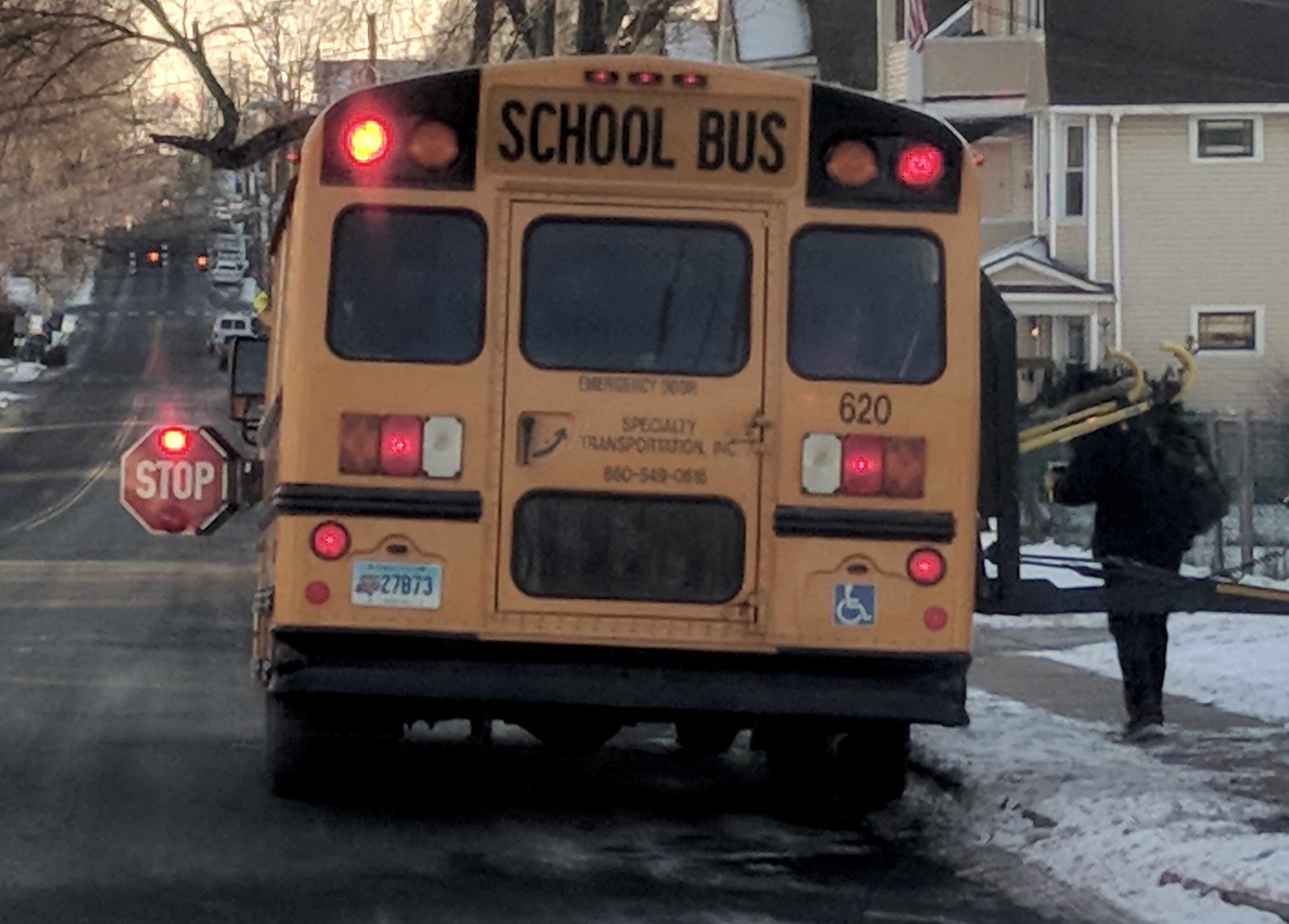 A school bus in Hartford picks up a student.

After being asked by the governor’s budget office to recommend places to cut state education spending, Connecticut’s top school officials have decided reductions are not possible.

“We respectfully stated that we are unable to reduce further,” Education Commissioner Dianna Wentzell told the State Board of Education, which then unanimously approved responding that cuts are not possible.

The education officials said they have concluded cuts would place the state in danger of violating federal laws, including those governing the education of students with disabilities. State aid to local districts already has been cut enough, they said.

The board and commissioner took their position as the state awaits a decision from the Connecticut Supreme Court on whether the state is spending enough on the state’s neediest districts and exercising sufficient oversight over them.

Further cuts to education also could jeopardize the legislature’s attempt to respond to the lower-court decision the Supreme Court is now considering, which found that the state’s method of distributing school aid is irrational and unconstitutional.

In the bipartisan budget that the legislature approved, it reduced education aid to middle- and high-income districts and shielded the 33 poorest districts from cuts. They also promised to follow a new formula that would increase education spending over the next nine years and direct it predominantly to the poorest districts.

This year’s cut of $84 million to the state’s primary education grant – the Education Cost Sharing grant – came on top of a $50 million cut last year, reducing ECS money being sent to local districts by 6.5 percent. Other smaller grants that districts have historically received also have been cut or eliminated.

Wentzell said cuts to programs the state education department oversees  — such as the elimination of funding for professional development and teacher mentors — also are problematic.

“We won’t be able to provide the professional learning that we know will have the ability to most quickly help our kids,” Wentzell told the board last month. “Those are significant impediments to making a difference for kids.”

Staffing at the agency is at a record low of 158 full-time employees. A half-dozen are planning on retiring in the next several months, and officials said they worry that more will.

“We are at a point now where even our statutory work will be difficult to carry out,” Kathy Demsey, the education department’s budget chief, told the board last month.

Wentzell told the board Wednesday that she gave the governor’s budget chief a heads up that they would not recommend further cuts for the fiscal year that begins July 1 and that he was understanding.

“Secretary Barnes acknowledged that education has been reduced as much as we possibly can,” she said.

“I hope they will keep recognizing that, and the legislature too,” responded Allan B. Taylor

But shielding education spending from the state budget knife is a big request, given anticipated deficits. The legislature’s nonpartisan fiscal office is expected to do a projection in coming weeks on the size of the deficit.

The governor’s budget office was unwilling Wednesday to commit to protecting education from further cuts next year.

““We are in the process of drafting Governor Malloy’s FY19 budget proposal presently, which, as recent years have proven, is subject to changing circumstances such as rapid revenue and economic developments and expenditure needs across the whole of state government that must be weighed against one another,” said Chris McClure, spokesman for the governor’s Office of Policy and Management. “It is far too early for commitments to be made regarding the specifics of agency funding levels, but we are receptive and sympathetic to the needs and input of the agencies.”

In a letter to all state agency leaders, the governor’s budget office indicated big cuts will be necessary.

“Given the scale of the fiscal challenge facing the state, all agencies are strongly encouraged to submit ideas for program reductions and eliminations,” the letter reads.

The governor will release his budget recommendations on Feb. 7 for the General Assembly to consider.