More CT residents sign up for Obamacare than last year 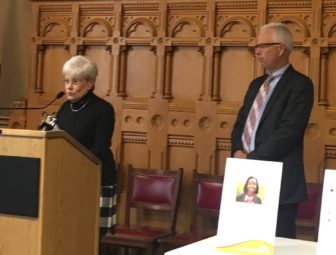 Access Health CT CEO Jim Wadleigh and Lt. Gov. Nancy Wyman viewed the enrollment results as a victory, especially in light of challenges from Washington, D.C., where the Administration and Republicans in Congress have been working to eviscerate the Affordable Care Act (ACA).

In December the new federal tax law eliminated the ACA mandate that requires individuals to sign up for health insurance or pay a penalty. Wyman, who chairs Access Health’s board, said she was meeting with a bipartisan group of Democratic and Republican leaders Monday afternoon to discuss further legislative healthcare changes, including the possibility of introducing a state-level individual mandate.

“We’re all well aware of the challenges that continue to come out of Washington, D.C., that talk about repeal and replace, that has only led to more confusion for Connecticut residents,” Wadleigh said.

“I viewed this open enrollment as the most challenging one that Access Health has ever had to endure,” Wadleigh said. “There were only seven weeks for an open enrollment period — that is down from the three months we’ve had in previous years, and, as a reminder, in year one we had six months.”

The two insurers that participated on the exchange this year are ConnectiCare and Anthem, which enrolled about 83,000 and 31,000 customers respectively.

According to Access Health CT, 13,419 of those who signed up were new customers who had not previously been in the exchange’s system. About 70 percent, or 80,171, were retained customers, and roughly 12,000 people didn’t re-enroll.

Wadleigh did not have exact numbers for how many people bought into each of the different plan tiers – gold, silver, and bronze – but said more information would be available next week. Broadly, he said people generally kept the type of coverage they already had, even though he would have expected people to move to lower-tiered plans.

Despite describing the enrollment period as a success, Wadleigh said 23,000 customers still need to send the exchange verification documents in the next two months to avoid losing their coverage. Customers also must make their first payment to ensure enrollment. Wadleigh said Access Health typically loses 15 percent of its customers in the first month because they fail to pay.

Jake Kara contributed to this report.