One is a Republican mayor making his third bid for governor. Two others are Democrats with interesting resumes, but no experience seeking office. All three not only share an ambition to become Connecticut’s next governor, but they formally declared their candidacies Tuesday within an hour of each other in Danbury, New Haven and Hebron.

The announcement by Boughton was no surprise. This is his third campaign for governor, and he opened an exploratory campaign 13 months ago that he says has raised $272,000, far more than $250,000 necessary to qualify for public financing. He will be on the stage Wednesday at a forum for GOP gubernatorial candidates. 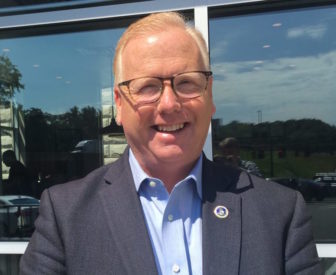 Boughton, 53, is running on his record as the chief elected official of a city with an AAA bond rating, low unemployment and a fully funded pension plan. He already has cleared a hurdle that tripped him in previous runs: Qualifying for public financing worth more than $1 million in a primary and $6.5 million in the general election long before the GOP nominating convention in May.

“It is really a huge difference,” Boughton said. “We’re essentially done, and now we can focus on the politics out there. It’s a great feeling. With an open seat, the atmosphere is ripe for our candidacy.”

Connolly, 43, the former state commissioner of veteran’s affairs, opened his campaign for the Democratic nomination at his American Legion Post in Hebron, the east-of-the-river suburb where he lives with his wife and two school-age sons. He has been raising money as an exploratory candidate since October, but he declined to say how much. 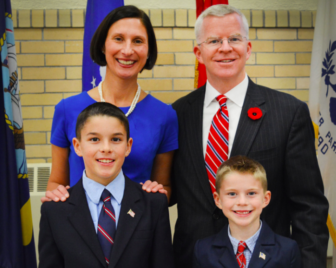 Sean Connoly with his wife, Carol, and their sons.

“My approach is to attack challenges head on, to work together in solving problems and not worry about finger pointing,” said Connolly, who likened the state’s economy to a leaking dam in need of emergency repair, not bickering over blame. “We’ve really got to get past that. That’s going to be my approach.”

Connolly is a lieutenant colonel in the Army Reserves. His active duty service has included deployments in Iraq and Kuwait as a military prosecutor and brigade legal advisor. After his active duty service, C0nnolly worked at Pratt & Whitney as the company’s global ethics and compliance officer.

Then there is Smith, 68, of Greenwich, a native Tennessean with a background in corporate and crisis communications, including stints at Hill & Knowlton, Phillip Morris, Diageo and the Bill Clinton White House, advising the president’s impeachment defense team. He also was vice chairman of AmeriCares, the disaster relief group based in Stamford.

“The governing class has not succeeded, and I am not part of the governing class,” said Smith, who announced his candidacy at a school in New Haven, the biggest source of votes in statewide Democratic primaries. “This is one of the things that qualifies me to be governor at this time in our state’s history. I have experience in the business world, the NGO world, and the political world but not as an elected official.” 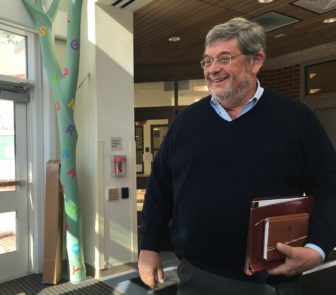 Guy Smith at his announcement in New Haven.

Connolly and Smith each talked about economic growth as priorities.

But if public employees are not the enemy, Smith is unwilling to agree with them on the need for new tax revenue.

Connolly, who posted an economic growth plan on his campaign web site, said the current size of state government and its municipal aid commitments are not sustainable. He said municipalities are going to have to embrace “structural changes” — namely regionalization — in how they deliver services.

As the commissioner of veterans affairs, Connolly said, he learned to simplify applications for housing assistant and make other efficiencies. He called that “taking out non-value-added pieces from the puzzles.”

A half dozen Democrats declared before Connolly and Smith, but only two, Mayors Dan Drew of Middletown and Joseph P. Ganim of Bridgeport, are raising money and assembling campaign organizations. Two others, Hartford Mayor Luke Bronin and former state Sen. Jonathan Harris of West Hartford, have active exploratory campaigns.

Bronin says he has raised more than $110,000 in 25 days. Harris, who has been raising money since April, says his fundraising has topped $232,000, with 89 percent in contribution of no more than $100. Exploratory committees can accept maximum donations of $375; qualifying contributions must be between $5 and $100.