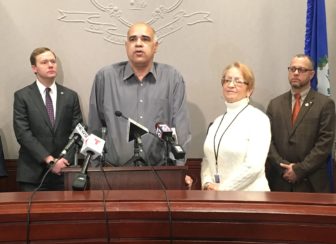 As Puerto Ricans continue to migrate to Connecticut in the wake of Hurricane Maria, state lawmakers and local officials Wednesday called for further aid to help evacuees and announced a new multi-agency task force to tackle issues facing them.

Officials expressed anger and frustration as they made impassioned calls for increased funding and a coordinated effort to help the thousands of displaced Puerto Ricans in the state.

While members of the Black and Puerto Rican Caucus, other state legislators, and Hartford City Council members voiced gratitude for current support, they said there is more to be done. State Rep. Angel Arce, D-Hartford, stressed Puerto Ricans are, and need to be treated like, American citizens.

Arce questioned what roughly 40 displaced families in Hartford, currently housed under the Federal Emergency Management Agency (FEMA) Transitional Sheltering Assistance program, will do when that aid ends. The program, which allows evacuees whose homes were destroyed to stay in subsidized hotels, recently was extended through March.

“And I’ll tell you, I love this country, I love this state … but I tell you Puerto Rico is an American territory, and we deserve the same treatment as Texas, Florida and any other state in the United States,” Arce said. “And I say that with anger because I don’t believe that we should have waited this long for the people of Puerto Rico to get the help that they deserve.”

Hartford City Councilman James Sanchez said the issues start in Washington, D.C., and that he wants to unite the Puerto Rican and Latino community.

“Because for some reason I feel that there is some kind of discrimination going on and coming from the White House when it comes to Latinos and Puerto Ricans,” Sanchez said.

Ritter added officials have heard evacuees are getting different answers to the same questions, and at times are not aware of the proper procedures for applying for benefits or enrolling in schools.

“This working group, this one-stop-shop of people communicating on a constant basis will eliminate the need for 15 phone calls and 25 emails. We think it will be very productive moving forward,” Ritter said.

Hartford City Councilwoman Wildaliz Bermudez welcomed the upcoming task force and said the state “certainly needed it right from the get-go.” Bermudez said thousands of families will continue to come to Connecticut since it has the largest Puerto Rican community in New England.

Hartford Superintendent of Schools Leslie Torres-Rodriguez said the district had welcomed nearly 400 displaced students since Monday and is expecting costs to increase by $1 million by the end of the year.

“I want to acknowledge and extend gratitude actually for the fact that there is going to be a task force that not only looks at locally what it is that is needed, but at the state level as well,” Torres-Rodriguez said. “Thus far we continue to collaborate but … our resources at our welcome center have come up short.”