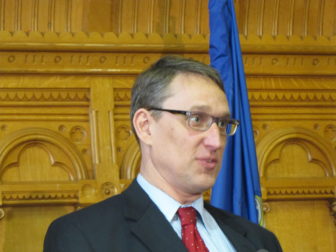 But it remains unclear how much of the windfall identified Tuesday by budget analysts is lasting — and how much is only an advance payment of funds Connecticut otherwise would receive in mid-April.

That’s because of a new budget requirement that automatically deposits the bulk of this new revenue in the emergency reserve — commonly known as the Rainy Day Fund — rather than making it available for use in the General Fund.

“We should all be encouraged by the substantial deposit to the Rainy Day Fund that we and OFA are projecting,” said Office of Policy and Management Secretary Ben Barnes, Malloy’s budget director. “I am especially pleased that the new Volatility Cap law requires that the recently disclosed, one-time windfall in tax collections will be set aside in reserve.”

Senate President Pro Tem Martin M. Looney, D-New Haven, said legislative leaders are committed to begin working immediately to close this year’s budget deficit. “A bipartisan budget requires a bipartisan budget fix,” Looney said. “The Consensus Revenue Report has made clear that we have more work to do to rebalance the budget. That’s why, last week, I called on Democratic and Republican legislative leaders to begin meeting immediately so that we can build a framework to solve Connecticut’s current budget deficit and address several other critical areas of the budget.”

Analysts, who are mandated to project budget revenues three times annually, estimated in Tuesday’s report that the income tax would collect $9.77 billion this fiscal year, which ends June 30.

That’s $586 million more than the level legislators anticipated when they crafted the budget last fall.

That $586 million increase actually reflects a $675 million jump in receipts tied to quarterly filings — which primarily involve capital gains and other investment income — and a roughly $90 million drop in receipts from paycheck withholding.

Because of the new volatility cap provision in the state budget, $665 million of that $675 million surge in income tax receipts tied to quarterly filings must be deposited into the state’s cash-starved emergency reserve.

Malloy had warned last week that quarterly payments received in December and January by the Department of Revenue Services were running $900 million ahead of projections.

Only about $675 million of that $900 million has been deposited to date. Because this largely involves enormous payments from a few wealthy taxpayers, payments can take weeks to clear — and some won’t be counted until the next revenue forecast is issued on April 30.

But Connecticut might be better off not counting all of that $900 million bonus now — since Malloy and some legislative leaders have said some of it is an illusion.

Some households, they said, paid more state taxes in December because their investment earnings grew. But others also inflated their December 2017 payments — while also intending to reduce their April 2018 payments — to take better advantage of changing federal income tax laws.

In other words, some of state income tax payments Connecticut received in December simply are an advance of money it otherwise would receive this April.

Congress recently capped the level of federal income tax deductions that can be claimed for state and local taxes paid — starting in the 2018 tax year and reflected on the returns households will file in the spring of 2019.

So by making extra state tax payments in 2017, households still can take maximum advantage of the outgoing federal income tax system of deductions before it expires.

“Huge tax hikes without significant reductions in spending are not the answer,’’ she said, noting that the new reports shows revenues in some areas besides quarterly income tax filings are underperforming, including sales and real estate taxes.

Despite the recent surge in income tax receipts, Senate Republican leader Len Fasano of North Haven said the overall weakness of other revenues represent “more of the same signs of a sluggish economy that continues to restrain growth in Connecticut. Our state remains well behind the progress of other states as a result of the failed policies of Governor Malloy and legislative Democrats.”