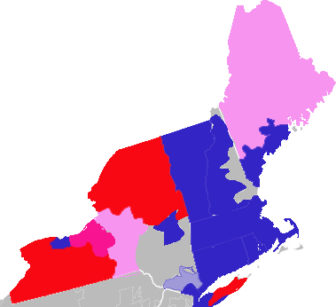 Washington – Connecticut’s all-Democratic delegation to the U.S. House of Representatives has been hampered by being in the minority since 2010, but that may change this year.

The five Democrats who represent Connecticut in the U.S. House are all expected to win re-election, according to analysts like the Cook Political Report. But what is a lot less certain is whether the GOP will keep its majority in the U.S. House. A flip of the House from Republican to Democratic control would potentially affect Connecticut more than most other states by giving Connecticut lawmakers the chairmanships of several important subcommittees.

There are several reasons analysts think the U.S. House could flip:

GOP leaders, however, say their party has shown strength and accomplishment, pointing to their recently approved tax bill, which they say will help them in November.

“The reason I feel confident and comfortable is because we ran on a set of ideas and policies. We’re now executing those ideas and policies, and the results are proving themselves,” said House Speaker Paul Ryan, R-Wis.

But the new tax law is not popular with everyone. Republicans in high cost-of-living states are feeling heat from constituents who are losing some of the deductibility of state, local and property taxes.

Then there’s uncertainty over the “Trump effect.”

Gary Rose, the head of the political science department at Sacred Heart University, said Trump’s controversial and mercurial behavior – such as his “vile statements” about Haitians and those from African countries, “is going to be felt in some districts.”

On the other hand, gerrymandering of district borders to favor one party’s candidate has shrunk the number of competitive races and favored Republicans, Rose said.

Still, the number of GOP seats shifting to “leaning Democratic” seems to grow by the week.

The latest is a Tucson, Ariz.-based House seat that will be vacant because Republican Rep. Martha McSally has decided to run for the Senate.  And last week a poll by Quinnipiac University showed Democratic House candidates had a massive 17-point lead on a generic ballot.

“There is reason to believe that the GOP majority is in jeopardy,” Rose said.

Rose said turnout is likely to be a factor in November’s elections. If it is low, it will favor Republivcans. But a high turnout will favor Democrats. That would bring Connecticut’s House Democrats in from the political wilderness.

“It could be a culture shock for some of them,” Rose said.

Rose said a flip of the U.S. House would sharply increase the Connecticut lawmakers’ chances of passing legislation, at least in the House.

Becoming a member of the majority would allow Connecticut lawmakers to become chairmen of subcommittees with authority over issues that are important to their districts, and the state.

Chairmen have the authority to schedule hearings and advance legislation on key issues.

Rep. Joe Courtney, D-2nd District, for example, probably would chair the Armed Services seapower subcommittee, which could benefit the state’s submarine industry and the New London Naval Submarine Base.

Rep. Rosa DeLauro, D-3rd District, is in line to become chairman of the House Appropriations subcommittee in charge of the budgets of agencies and programs involving labor, health and social services.

Rep. John Larson, D-1st District, said he probably would chair the Ways and Means subcommittee in charge of Social Security, allowing him to advance a plan to increase benefits for recipients by imposing an increase in Social Security taxes by .01 percent a year.

Larson, who is in his 20th year in Congress, said he’s been in the minority for 14 of those years.

He said the need to work with members of the majority party to get anything done “has made me a better legislator.” But he said being in the majority, instead of the minority, “makes all the difference in the world because we can move an agenda.”

Rep. Jim Himes, who spent a short time in the majority in his first term in office, would also advance on the committees he’s a part of: the House Financial Services Committee and the House Intelligence Committee. He’s likely to become chairman of the panel with authority over the National Security Agency if the House flips.

But Himes doesn’t want to celebrate too soon.

“No one here is counting their chickens before they hatch, and we’re not going to prognosticate about things that may or may not happen,” said Himes’ press secretary Patrick Malone. “You get burned in elections if you gaze to the future instead of focusing on the present.”

Malone said Himes is going to spend the year, “as every year,” fighting for infrastructure funding, “implementing sensible firearm regulations, improving healthcare, and creating jobs for families in our community.”

Winning approval for legislation requires success in both houses, of course, and if the U.S. Senate remains in GOP hands, Connecticut’s Democratic lawmakers “may run into a brick wall,” Rose said.

On the other hand, maybe not, Rose said, if they could find compromise with Senate Republicans – and even the White House.

He also said belonging to the party in power instead of the minority is likely to raise the profile of Connecticut lawmakers “and get them a lot more coverage in the media.”

With the recent election of Democrat Doug Jones in ruby-red Alabama – which some political analysts say is another sign Republican fortunes are fading – the GOP has a slim, one-member majority in the Senate.

But the Cook Political Report and other analyst say it’s much more difficult for Democrats to take over that chamber.

They even suggest Democrats may lose Senate seats in November’s elections.

That’s because the Senate electoral map is extraordinarily tough for Democrats this year. Democrats are defending 26 seats; Republicans only eight.

In addition, many of the Senate Democrats on the ballot are in deep-red states like West Virginia and Missouri that voted for Trump by double digits in 2016.

Sen. Chris Murphy, D-Conn., is running for re-election this year, but his seat is considered safely Democratic.

“There is some reason to believe Republicans can increase their seats,” Rose said.

Others say if the Democratic “wave” is big enough this year, it could also swamp the Senate.