An independent and Democrats say tolls are necessary 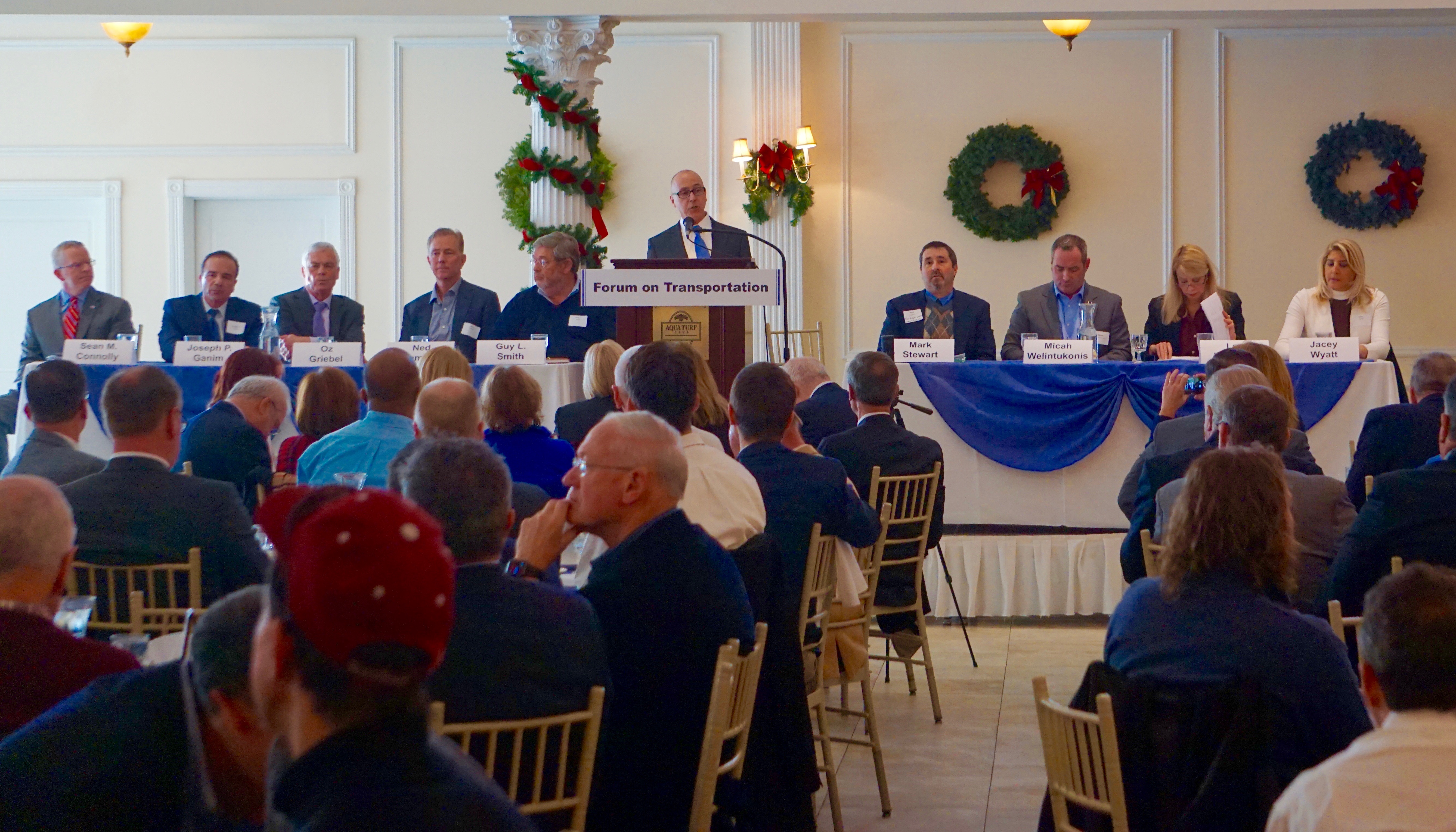 Southington — Oz Griebel, a petitioning candidate for governor who once led the state Transportation Strategy Board, told an audience of construction executives and union members Friday that Connecticut must embrace electronic tolling and higher gasoline taxes to preserve and improve its transportation infrastructure.

At a transportation forum for Democratic and unaffiliated candidates, Griebel offered the broadest prescription for how to stabilize and grow a special transportation fund now projected to hit insolvency by 2022, leaving the state unable to borrow money to address a growing backlog of transportation needs.

Many of the Democrats, unlike the Republican field at a similar event a month ago, agreed on the need for the revenue that tolling would bring, while they largely dodged the issue of higher gasoline taxes. Both forums were sponsored by the Connecticut Construction Industries Association.

Malloy, who is expected to share his own transportation funding proposals by month’s end, warned last week that hundreds of capital projects worth $4.3 billion would have to be suspended over the next five years without a rapid infusion of new revenue.

“I think today is a strong indication that the governor’s message of a week ago is starting to sink in,” said Don Shubert, the president of the association.

But Lyle Wray, the executive director of the Capitol Region Council of Governments, said he was frustrated after the two forums that so few candidates in the field of more than two dozen gubernatorial hopefuls seem to grasp the depth of Connecticut’s transportation needs and their impact on the economy.

The list of 20 cities Amazon identified Thursday as remaining candidates from an initial field of 238 for a second headquarters to house 50,000 employees was dominated by communities that long ago established stable revenue sources to finance improvements to mass transit.

Political support has been weak for two of the Malloy administration’s mass transit initiatives, a bus rapid transit line from New Britain to Hartford that has exceeded passenger projections, and commuter rail service set to open late this year from Springfield through Hartford to New Haven.

Griebel, who was chairman of the Transportation Strategy Board from its inception in 2000 until mid-2005, noted that the board made numerous recommendations, including tolling, gas taxes and a temporary transportation surcharge on the sales tax.

“None of this has been done,” Griebel said.

Ned Lamont, a Democrat who entered the race Wednesday, told the audience of more than 300 that electronic tolls are necessary begin transportation improvements vital to the state’s economic growth.

“I’m going to make it a priority from day one,” Lamont said, drawing applause from union members, business owners and others whose livelihoods depend on infrastructure spending.

Smith proposed a special debit card motorists would use to pay tolls and buy gasoline, easing the way for Connecticut residents to get a transportation credit on their taxes. Connolly said tolls were necessary to capture revenue from out-of-state residents who use Connecticut’s highways.

“You and I are currently subsidizing others driving through our state,” Connolly said. “We are paying. They are not.”

Bridgeport Mayor Joseph P. Ganim speculated that Amazon’s refusal to short-list Connecticut for its new headquarters was at least partially due to transportation. But he said nothing about what revenue sources he would favor to address a transportation crisis that will be felt long before the transportation fund’s projected insolvency in 2022.

The two forums were open to any declared candidate for governor, including those who have demonstrated no ability to raise money, assemble an organization or otherwise credibly compete in the race to succeed Malloy. Joining Griebel, Lamont, Connolly and Smith were Lee Whitnum, Jacey Wyatt, Mark Stewart and Micah Welintukonis.

Stewart, who began his campaign as a Libertarian and then declared a month later as  a Democrat, said progressives have ruined Connecticut, then shifted to his other campaign — organizing support to try to bring back Hartford’s lost NHL franchise, the Whalers.

“You don’t have to have a loser mentality here,” Stewart said. “We can get ‘em back, thank you.”

He left to laughter and applause.