Washington –  Connecticut residents will still get their mail and Social Security checks, but the shutdown of the federal government will reverberate through state agencies – especially those that are most reliant on federal grants and federal workers — and many in the state would eventually feel an impact.

The Malloy administration said it could not immediately assess the impact of the shutdown that began shortly after midnight Friday, a result of the failure of congressional Republicans and Democrats to come to an agreement on how to keep the federal government running.

But the state Office of Management and Policy sent state agency heads a memo Friday afternoon warning a federal shutdown was imminent.

“Connecticut has made preparations to mitigate the impacts of the Trump shutdown as much as possible,” said Gov. Dannel P. Malloy.”My office has been in contact with agency heads and contingency plans have been updated. But unless the president and congressional Republicans do their job, Connecticut residents who work for the federal government will not be paid, contractors will be laid off, and loans to Connecticut small businesses won’t be made.”

The last time a federal shutdown threatened, in September of 2013, the Malloy administration asked all state agency heads to submit memos on the shutdown’s impact.

The State Department of Aging said a shutdown of more than a few weeks would affect home-delivered and group meals for seniors, legal and transportation services, health promotion and respite for caregivers

The Connecticut Department of Public Health said it had 97 federal grants totaling about $208 million that year, accounting for more than half the agency’s budget. The health department also said it employed about 282 federally funded full-time employees, “for a bi-weekly payroll of $722,656.”

There are about 9,000 federal workers living in Connecticut — 2,625 working for the Pentagon alone, mostly at Naval Submarine Base New London.

Those federal employees have been classified as “essential” and will continue to work. Those essential workers include the uniformed Navy employees at the sub base, as well as some civilians who work at the base, and Coast Guard employees stationed in Connecticut.

But hundreds of federal workers in Connecticut have been furloughed for the duration of the shutdown.

Whether they are required to show up for work or not, these federal workers will not get paid unless they work for an agency like the U.S. Postal Service, whose budget is not dependent on appropriations from Congress.

During the 2013 shutdown crisis, Thaddeus Martin, the adjutant general of the Connecticut National Guard wrote Office of Policy and Management chief Ben Barnes that the state would have to absorb the cost of 66 guardsmen who are normally paid by the federal government. 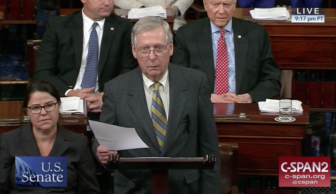 Senate Majority Leader Mitch McConnell on the Senate floor after failure of the short-term funding bill.

“The Military Department can only absorb the additional cost for up to 10 days; however, if the shutdown continues longer, layoff notices will have to be issued,” Martin said.

The University of Connecticut told Barnes that “in the short term, the effect of the shutdown will delay the arrival of new research grants and contracts” and “new awards already made could be rescinded or substantially delayed, depending on the length of the shutdown.”

In the short-term, the university said it could cover the loss of federal funding with its own money, but said, “If the shutdown is longer term, we would need to reevaluate the long-term outlook of our federally funded programs.”

The federal government shut down because congressional Republicans insisted on a  four-week funding extension that included a six-year authorization for the Children’s Health Insurance Program – known as HUSKY B in Connecticut – and delayed several Affordable Care Act taxes.

Democrats, on the other hand, called for a funding extension for several days that would allow more time for negotiations over the legal status of immigrants brought to the United States illegally as children, known as “dreamers.”

The House voted to approve the short-term spending bill Thursday, but hopes of averting a shutdown were dashed after the GOP failed to overcome a Democratic filibuster in the Senate late Friday.

Sen. Richard Blumenthal and Chris Murphy voted with most Democrats and a few Republicans, to block the bill on a 50-49 vote.

Sixty votes were needed to override the Democratic filibuster in the Senate.

All five Connecticut House members, all Democrats, also voted against the GOP’s short-term spending bill, which would have kept the government open until Feb. 16. 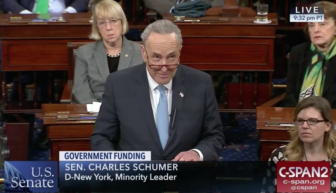 Rep. Joe Courtney, D-2nd District, said he voted against the short-term bill, known as a continuing resolution or CR, because Congress has already approved three of these stopgap measures since September. The federal fiscal year began on Oct. 1.

“In September, I supported a continuing resolution with assurances that we would work toward a bipartisan budget agreement before the end of 2017,” Courtney said. “Now here we are in January 2018 and it feels like Groundhog Day has come early as we vote once again on a stopgap spending measure punting the issue into next month. Where does this end?”

“This is the behavior of obstructionist losers, not legislators,” she said.

Democrats blamed Republicans, saying the party controls the White House and both chambers of Congress and should have been able to pass a long-term budget Democrats could support.

“President Trump and the Republican majority have failed at governing at the most fundamental level, and this unprecedented federal government shutdown is the most poignant chapter,” said Rep. Rosa DeLauro, D-3rd District.

Sen. Chris Murphy tweeted shortly after the government shutdown, “Trump and Republicans refused to negotiate with Democrats, wrote a terrible bill, and now own this shutdown. Trump rooted for a shutdown, and now he got what he wanted. Bad night.”

The impact of the shutdown in Connecticut will depend largely on how long the federal government is shuttered.

A prolonged shutdown could affect the state’s $14 billion defense industry.

During the last shutdown, United Technologies announced plans for the temporary layoff of thousands of workers, a result of the shutdown’s furlough of federal auditors who audit and approve operations at the company’s plants.

The consideration of bids by smaller government contractors in Connecticut and the awarding of federal work to them will also be delayed if the shutdown lasts more than a week or two.

Some federal contractors in the state may even receive “stop work” orders.

According to the Congressional Research Service, there have been 18 federal government shutdowns since 1977. Most lasted three days or less, but the last one, which began Oct. 1, 2013,  lasted 16 days.