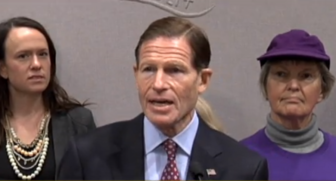 Sen. Richard Blumenthal at a press conference in Hartford Monday before traveling to Washington for the abortion bill vote.

Washington – Connecticut’s Democratic senators on Monday helped block a bill in the Senate that would have outlawed abortions after 20 weeks of pregnancy.

The Senate’s vote on the “Pain-Capable Unborn Child Protection Act” was 51-46, but the GOP needed 60 votes to overcome a Democratic filibuster of the bill.

Earlier Monday at a press conference in Hartford, Sen. Richard Blumenthal condemned Senate Majority Leader Mitch McConnell’s decision to put the bill to a Senate vote. The measure to restrict abortion has been approved in the U.S. House several times.

“It is shameful and disgraceful that this measure should be before Congress,” Blumenthal said. “Hands off women’s health care.”

Sen. Chris Murphy said abortions are “difficult decisions (that) should be made by women, not Washington.”

Instead of wasting valuable floor time with extreme, ideological bills to strip rights away from people, Republicans should be working with Democrats to negotiate a budget and keep our government running. Have they already forgotten their deadline is next week?” Murphy said.

President Donald Trump urged the Senate “to reconsider its decision and pass legislation that will celebrate, cherish, and protect life.”

“The vote by the Senate rejects scientific fact and puts the United States out of the mainstream in the family of nations, in which only seven out of 198 nations, including China and North Korea, allow elective abortions after 20 weeks of pregnancy,” Trump said. “We must defend those who cannot defend themselves.”

GOP Senate leaders knew the bill had a slim chance of approval in the Senate, where Republicans have only a 51-49 majority. But they hoped to put some vulnerable Democrats running for re-election in red states this year on the record on abortion, especially Sens. Claire McCaskill of Missouri and Heidi Heitkamp of North Dakota.

Both women voted against the bill, as did Sens. Sue Collins, R-Maine, and Lisa Murkowski, R-Alaska, both of whom were the sole defectors from their party.

But several Democrats from “red” states voted for the bill. They were Sens. Joe Manchin or West Virginia, Joe Donnelly of Indiana and Bob Casey of Pennsylvania.

She said at 20 weeks of pregnancy, many high-risk women “receive the results of critical prenatal testing and have a lot of thinking to do.”

“If the results are bad…very often abortion needs to be at least a consideration in that woman’s mind and that of her partner,” Yolen said.

But antiabortion groups argued that 20-week fetuses respond to a series of stimuli.

Connecticut bans abortion after “fetal viability,” which is considered later than 20 weeks but is determined solely by a physician.

But 24 states impose abortion prohibitions after a certain number of weeks of pregnancy. Seventeen states impose a ban 20 weeks after fertilization or its equivalent of 22 weeks after the woman’s last menstrual period on the grounds that the fetus can feel pain at that point in gestation.