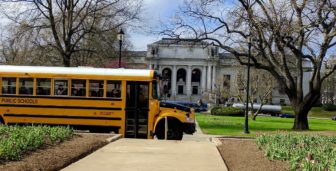 A school bus with the state Supreme Court in the background.

The state says the Connecticut Supreme Court should decline to reconsider its recent decision upholding state spending on education as constitutionally adequate and reject a request from a coalition of parents, teachers and local municipal leaders to rehear the case.

In a four-page brief filed with the high court Tuesday, Joseph Rubin, associate attorney general, wrote that there are no new arguments since the justices “discussed this issue in depth, and neither side swayed the other.”

In asking for the court to reconsider the case last week, the Coalition for Justice in Education Funding pointed to all the deficiencies in low-income school districts that were revealed during the trial in the case.

But Rubin said there are many positive things going on in those same schools.

“A mixture of positive and negative factual findings for both sides is inevitable in a trial of the magnitude of the present one, but that sort of result does not provide a license for either side to claim that the trial court was wrong in its ultimate factual conclusions…,” Rubin wrote.

It is now up to the Supreme Court to determine whether they will reconsider their 4-3 decision.