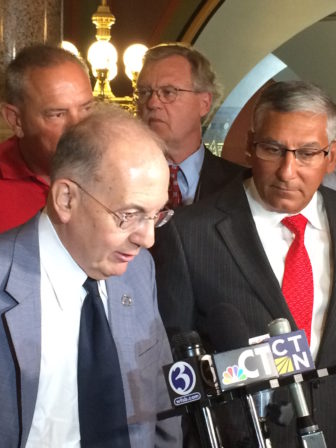 A partisan rift centered on taxes and state employee benefits threatens to derail legislative efforts to balance the state budget — both in the current fiscal year and the fiscal cycle beginning July 1.

Democratic and Republican legislative leaders, who returned this week to the Capitol to open the 2018 session, conceded they are sharply divided on how to wipe more than $400 million in red ink off Connecticut’s books.

And while they also pledged to reach for a bipartisan compromise, no one expressed optimism this would be achieved before Connecticut’s next governor takes office 11 months from now.

“I don’t think anyone can predict what happens in this building,” said Senate Republican leader Len Fasano of North Haven.

“The one thing I can be confident in is my work ethic,” said House Speaker Joe Aresimowicz, D-Berlin. “We certainly will try.”

What are leaders trying to solve before the session closes on May 9?

According to Comptroller Kevin P. Lembo and Gov. Dannel P. Malloy’s administration, the current fiscal year — which closes June 30 — is on pace for a $245 million deficit. And the preliminary budget for the fiscal year starting July 1, which was adopted as part of a two-year plan last October, already is $165 million in the red, according to the governor’s budget office.

Several other risky assumptions in the plan easily could push the built-in shortfall, the administration says, closer to $300 million.

But legislators averted a much larger potential deficit four months ago when they adopted the latest state budget. What’s hindering their efforts to do so again?

Problems were postponed, not solved

Legislators swept hundreds of millions of dollars from one-time sources and specialized accounts to pay for ongoing expenses in that plan. Most of those solutions no longer are available. And when those one-time monies are exhausted — after this fall’s state election — the next governor must craft a new budget with a built-in hole of $2.2 billion in the first year and $2.9 billion in the second, according to state analysts.

Traditionally, legislators from both parties are reluctant to consider tax hikes in even-numbered years, when there is a state election.

And many of Malloy’s proposals for closing the deficits for this fiscal year and next involve revenue.

To close the $245 million gap this fiscal year, Malloy released options in December that included raising the sales tax rate from 6.35 percent to 6.9 percent, and boosting the charge on restaurant transactions from 6.5 percent to 7 percent.

His proposal to avert the $165 million shortfall in 2018-19 includes a wide array of smaller tax hikes that together would raise more than $230 million per year, involving the income, sales, corporation, cigarette and real estate conveyance taxes, along with bottle deposit fees.

‘FEW EASY ANSWERS LEFT’
Gov. Dannel P. Malloy’s new budget proposal features a broad array of small tax hikes that collectively would raise more than $235 million next fiscal year. With the majority of the budget tied to fixed costs — some of which are growing rapidly — and with lawmakers unwilling to spread teacher pension costs onto municipalities, Malloy says Connecticut has few other options to balance its books starting July 1.
Source: Office of Policy Management

Klarides says House Republicans compromised last fall when they supported modest income, cigarette and hospital tax hikes. And given that Connecticut taxpayers faced much larger increases in 2011 and 2015, she says the revenue option is off the table.

“The Democrats always go back to their old playbook: Let’s go raise more money from the people of this state,” she said, adding the state’s economy has paid a stiff price for past tax increases. “Every time we have to go through this, it becomes increasingly more difficult.” 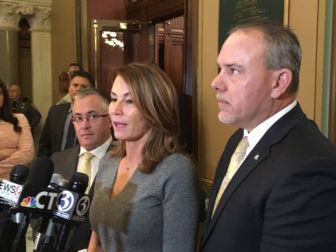 House Speaker Joe Aresimowicz, a Berlin Democrat counters that it’s easy to take tax hikes off the table; the hard part is cutting some other program instead. “There’s no more fat,” he said. “There’s no easy cuts.”

Malloy warned the legislature on Monday when he released his latest budget plan that “there are few easy answers left.”

Legislators rebuffed his proposal last year to shift a portion of skyrocketing teacher pension fund contributions onto cities and towns, and also said nothing in December when Malloy suggested more cuts to municipal aid to help close this fiscal year’s deficit.

Most of the fastest-growing segments of state financing are fixed, at least to some degree, by contract — specifically retirement benefit programs and other debt costs.

Fasano insists there is an alternative, but Democrats don’t want to face it.

Pension and retirement health care benefits for state employees are fixed by a contract that runs through mid-2027.

The Senate GOP leader offered a plan last spring to order benefit reductions effective in the second-half of 2027 — but take some of the savings in the budget now.

Malloy, Democratic legislative leaders and state employee unions insist this would violate collective bargaining laws and set Connecticut up for a court battle it would lose.

Aresimowicz agreed with Looney that Democrats won’t accept that as a means to close the current deficits.

Fasano countered that Democratic leaders need to check their history.

“Not all Democrats may have the same view as Senator Looney and the speaker,” he said, referring to three Democrats in the Senate and five in the House who voted last September for a GOP budget proposal that included the 2027 retirement benefit changes.

Malloy vetoed that budget and another package — absent those benefit changes — passed with stronger bipartisan support in October.

“The fixed costs are what is killing our state,” Fasano said. “We’ve got to look at ways to reduce those fixed costs. That’s why we all have to get into the room and have a discussion about choices like this.”

Technically, the legislature doesn’t have to deal with this problem right now.

If the state closes this fiscal year in deficit, officials first must draw upon the emergency budget reserve — or Rainy Day Fund — which holds about $212 million.

[That reserve could grow to almost $890 million, based upon a $665 million increase in December income tax payments related to capital gains. But analysts have warned much of that may only be an advance on payments taxpayers’ otherwise would have made in April, and there could be little or no windfall once the books are closed after June 30.]

If the Rainy Day Fund is not sufficient to cover any fiscal year-end deficit, then the state treasurer must borrow to cover the difference.

And as for the $165 million deficit projected for the preliminary budget in place for 2018-19, there is precedent for ignoring that as well.

In May 2008, Gov. M. Jodi Rell warned lawmakers that the preliminary budget they’d adopted for the fiscal year beginning that July 1 had a built-in hole of nearly $120 million.

[Later that summer, nonpartisan analysts would confirm a gap of $139 million.]

The legislature nonetheless adjourned and dealt with the deficit in the spring of 2009.