Fairness in Connecticut is fair game in politics 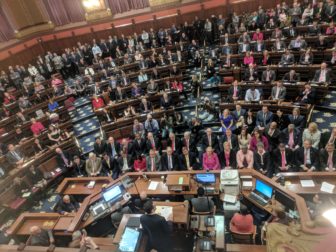 Malloy delivering his address in the House chamber.

Fairness, it is fair to say, is in the eye of the beholder; and last Wednesday, delivering his State of the State address, the beholder was Gov. Dannel P. Malloy.

Rather than focusing his speech on the state budget and its many travails (like issues on taxes and Medicare or child-care and college costs that he had addressed earlier in the week) the state’s chief executive articulated his ideas on what it means to be fair in Connecticut.  “It means a fair shot at a decent life for all people,” he said.

No one is beholden to Malloy’s vision, of course, and plenty of people were willing to say so, particularly the legislature’s Republicans, who don’t see eye-to-eye with the Democrats on the deficit problem and many other things.

How municipal officials feel about the state’s fairness might be influenced by how much money they get (or don’t get) for their schools.

Even fellow Democrat and State Treasurer Denise Nappier is not in favor of the governor’s proposal to restructure contributions to the teachers’ fund, which could, she says, jeopardize the state’s credit rating.

Connecticut’s Democrats in the legislature have their own take on what needs to be addressed in this legislative session, and their “values agenda” identifies items such as pay equity, a livable wage, free community college and paid family medical leave. Republicans wonder how some of those concepts can be affordable to a state already facing an enormous deficit and businesses trying to control costs.

How Connecticut should cope with the ballooning deficit caused by years of underfunding state employee benefits and retirement plans is likely to be central to any budget debate; and one state labor leader is already skeptical that the state’s new fiscal sustainability study panel is going to be fair to labor. Tax fairness and greater investment in Connecticut’s cities is the key to stabilizing the economy, the labor leaders say.

The governor is aware of course that the new federal tax reform bill passed earlier this year will potentially harm some Connecticut taxpayers by limiting their deductions for state and local taxes, so he has come up with a couple of ideas to counter that.

On the other hand, the budget bill passed early Friday by Congress, while running up the national deficit, will be pumping a lot of money into the Connecticut economy through both military and domestic spending. It also saves the iconic Newman’s Own food company from a huge federal tax bill because the company gives 100 percent of its profits to charity.

At the urging of U.S. Reps. John Larson, D-1st District, and Joe Courtney, D-2nd District, the Internal Revenue Service also undertook an act of generosity by extending the time Connecticut homeowners with crumbling foundations have to take a federal tax deduction for the cost of repairs. 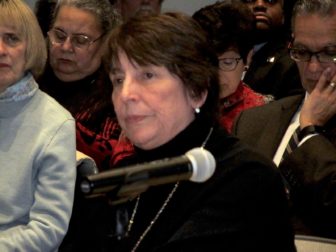 Barbara Brittingham, president of the New England Association of Schools and Colleges, has questions about the community college merger proposal.

There are still some other issues — issues that involve principles besides cost — that must soon be resolved, not the least of which is a proposed merger of Connecticut’s 12 community colleges into one mega-college.

There is also the conflict between the Mashantucket Pequot and Mohegan tribal nations and MGM Resorts International, who want to build casinos in East Windsor and Bridgeport, respectively.

Election fairness may also be an issue after one Democratic state senator put together a forum critical  of the legislature’s systematic weakening of state campaign finance laws.

Then there is the issue of the performance of Connecticut’s schools, the majority of which scored worse this year than in last year’s assessment. Seven of the 10 schools most in need of improvement also scored worse than the year before. Here is a breakdown.

In Washington, D.C., fairness is also an issue in the release of two previously classified memos regarding the FBI’s use of information to obtain a surveillance warrant on a Trump campaign operative. Democrats say President Donald Trump’s decision to release the Republican memo but not the Democrats’ rebuttal is inherently ___________.