An unlikely rebuke of the General Assembly over election laws 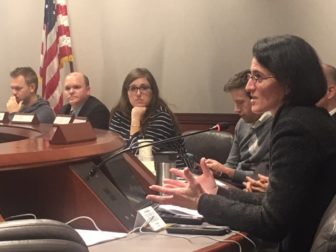 With a blandly titled “informational forum,” a Democratic state senator choreographed an unusual rebuke of the General Assembly and its leadership Friday, eliciting testimony about the systematic weakening of campaign finance laws in Connecticut, most recently by provisions inserted into the bipartisan budget adopted in special session last fall.

State and national experts testified about how the legislature, typically in actions not subjected to the accountability of individual votes, has produced a system rife with loopholes and enforced by a State Elections Enforcement Commission hobbled by staff reductions and a new budget provision that mandates dismissals of complaints unresolved in a year.

“I think it’s very important for everyone in the legislature to understand what we did in the fall,” said Sen. Mae Flexer, D-Killingly, who organized the forum as the co-chair of the Government Administration and Elections Committee.

Her Republican co-chair, Sen. Michael McLachlan of Danbury, archly noted that Flexer probably was initiating a “vigorous” public discussion with leadership of a subject normally discussed in private — the rules of the road for how candidates for the General Assembly and statewide constitutional offices finance their campaigns.

Connecticut adopted a voluntary system of publicly financing campaigns in 2005, the work of a Republican governor, M. Jodi Rell, and a Democratic legislature in response to a bid-rigging scandal that forced the resignation and corruption conviction of Rell’s predecessor, John G. Rowland. Before the Rowland scandal, a state treasurer was caught up in a kickback scheme.

“It’s very important we don’t go back to that,” said Karen Hobert Flynn, a former Common Cause lobbyist in Connecticut who now is the national leader of the group, which says it has a membership of 12,000 in the state and 1.1 million in the U.S. “It was really a very different world.”

The only testimony at the forum came from invited speakers: Hobert Flynn; Wendy Fields, executive director of the Democracy Initiative, a national coalition of labor, environment and civil rights groups; and Michael J. Brandi and Shannon Kief, top administrators of the State Elections Enforcement Commission.

Before the creation of the Citizens’ Election Program, as the public financing system is formally known, legislators heavily relied on a fundraising machine that was managed by legislative leaders and fueled by lobbyists and their clients. Participants in the voluntary program can accept individual donations of no more than $100, and most of the money must come from communities in their districts.

To be awarded public financing, candidates must demonstrate public support by meeting fundraising thresholds ranging from $5,000 for a state House race to $250,000 for governor. The public grants for a general election range from $25,000 for a House contest to $6 million for governor.

“Public financing shifts the focus of candidates and legislators to the people, where it belongs,” Fields said.

Flexer was elected in 2008, the first class of lawmakers who arrived at a State Capitol where legislators no longer had to rely on lobbyists for funding. Flexer said her generation of legislators was freed from worrying about the clout of prominent lobbyists.

“Frankly, I still don’t talk to them,” Flexer said. 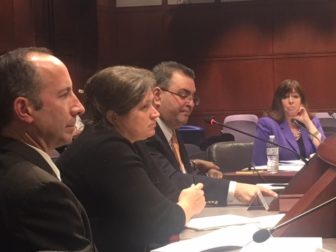 From left, Josh Foley, Shannon Kief and Michael Brandi of SEEC and Karen Hobert Flynn of Common Cause.

Hobert Flynn said lobbyists play a legitimate role in legislating, but their influence should rise from the quality of their information and arguments, not their fundraising.

She said the 2005 reforms allowed passage of a measure that had been repeatedly defeated by beer and soda wholesalers prior to public financing — a law that gave unclaimed bottle deposits to the state. By playing a role in directing about $25 million from the bottling industry to the state treasury, the campaign finance law largely financed itself, Hobert Flynn said.

Republicans have thrived in the era of public financing, growing from 37 to 72 members in the House — just four shy of a majority — and from 12 to an 18-18 tie in the Senate. But they also have attacked it as an improper use of public money in tough fiscal times. A budget crafted by the GOP and passed with a handful of Democratic votes last fall would have eliminated all funding for public financing. Gov. Dannel P. Malloy vetoed the budget.

The bipartisan compromise budget that eventually passed retained the program, but raised the limit on qualifying contributions from $100 to $250. It also imposed a one-year limit on investigations by the State Elections Enforcement Commission, a limit the commission says is crippling, coming after a 40 percent reduction in its staff.

Flexer said neither provision belonged in a budget, and neither was adequately vetted by the Government Administration and Elections Committee.

“When the bipartisan negotiations started, one has to think about where the starting point was for getting a deal,” Ritter said. “We still have a public financing system, and it’s one that I guess in total about 90 percent of legislative candidates will utilize, and I think that’s a good thing for our state.”

Senate Republican leader Len Fasano of North Haven, one of just four Senate Republicans who voted for the public financing program in 2005, said the one-year limit was a reasonable effort to prod the commission to focus on the most serious cases.

He said he was unimpressed by the role of Flexer as a critic, saying he did not recall her as joining Republicans in 2013, when they offered amendments in a failed effort to stop Senate Democrats from loosening the rules for how outside money could flow to the campaigns of publicly financed candidates.

Democrats justified the 2013 changes, which were inserted into the budget, as a prudent defense against attack ads funded by independent-expenditure groups after the U.S. Supreme Court’s Citizens United ruling, which threw out prohibitions on independent expenditures by corporations and unions.

The 2013 provisions allowed the state parties to make unlimited expenditures on Connecticut legislative races and permitted a greater degree of coordination between political candidates and Super PACs that may later make independent expenditures on their behalf. There had been a limit of $10,000.

McLachlan called that change a bus-sized loophole. As a result, a candidate who ostensibly was limited to individual contributions of no more than $100 could direct friends or family to give them thousands of dollars through the state parties.

Hobert Flynn said Common Cause agrees with McLachlan’s objections now, as it did in 2013.

The State Elections Enforcement Commission says there are meaningful reforms possible even within the limits of Citizens United, including greater disclosure of the sources of ads and other forms of paid messaging on social media. SEEC is proposing a bill based on federal legislation drafted in response to Russian intervention in the 2016 election.

It was one of four bills submitted Friday to the legislature by the commission.