As overdose deaths continue to climb, a new state initiative Miriam Delphin-Rittmon, commissioner of the state Department of Mental Health and Addiction Services

Last week, Gov. Dannel P. Malloy and state officials unveiled the  “Change the Script” campaign — another initiative aimed at fighting the opioid epidemic through the use of information and education.

A few days later, James Gill, the chief medical examiner, announced that 1,038 state residents had died in 2017 from accidental drug overdoses. That figure has nearly tripled in the last six years, from 357 in 2012.

Of those 1,038 deaths, 677 involved fentanyl  —  a powerful synthetic opioid drug 30 to 50 times more powerful than heroin — either by itself or in combination with at least one other drug.

In this Sunday’s conversation, The Mirror sat down with Miriam Delphin-Rittmon, the commissioner of the state Department of Mental Health and Addiction Services, to talk about this new initiative, the new data and what the state could be doing more of to fight opioid addiction.

What exactly is “Change the Script?”

It’s a campaign that is funded through federal funds that we received from SAMHSA, that’s the Substance Abuse and Mental Health Services Administration. SAMHSA received this money as a result of the 21st Century Cures Act that was a big piece of legislation that Sens. [Chris] Murphy and [Richard] Blumenthal were both part of.

We received $5.5 million for two years and we’re implementing a range of initiatives across treatment, prevention and recovery services and supports.

This “Change the Script” campaign is part of the prevention arm of that whole initiative. We’re excited about it … it’s really geared toward addressing a number of different target audiences — adults, all the way from 25 up to 54 … parents and families, friends, the general public and also prescribers and pharmacists.

The thing that’s nice about the materials that we’ve put together is that they’re adaptable so that communities can take things like posters, Powerpoint presentations, brochures, videos, flyers … a whole bunch of different things. There is a prescriber’s tool kit with information about prescribing.

What is the message of “Change the Script?”

This awareness campaign is an opportunity to share information about medication-assisted treatment, that it’s an evidence-based practice that research has shown can help people move into long-term recovery, along with other community services and supports.

What do you say to people who are afraid of medication-assisted treatment?

The research has shown us that addiction causes and contributes to biochemical changes in the brain. It changes the brain chemistry so the different forms of medication-assisted treatment really help to reduce cravings, which is a biochemical process that happens in the brain.

The medication-assisted treatment, whether it be methadone, buprenorphine, or Vivitrol, they really help to disrupt that craving and the physical addiction processes. But it then allows the person to be receptive to treatment and open potentially to treatment and so it’s valuable.

The other thing we say when we have a cold, we take cold medicine. For people that are diabetic, they take insulin. So because we know this is an illness that has biochemical processes or components, then to take methadone, buprenorphine, or Vivitrol, is a similar process.

What are your thoughts about access to that in the state? Do you think there are enough people prescribing the medications?

It’s something we’re absolutely trying to increase, the availability of prescribers. For a long time, there was a federal cap on the number of clients a prescriber could see. And so, in addition to the prescribers that we already have being able to prescribe more, now we’re implementing training and doing work to help try to expand the pool of new prescribers trained and certified to be able to prescribe buprenorphine.

We’re looking to increase the number of prescribers. We could always have more. We could certainly always benefit from more.

When looking at treatment, it’s not one size fits all. Throughout the state, you have many access points, whether it’s detox, 30-day rehab, other residential services or outpatient therapy. Do you think you have enough of each depending on what a person needs? What areas do you feel you have enough? What areas are you trying to bolster?

I think it ebbs and flows. 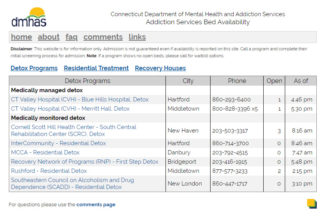 The departments website tells the public how many drug treatment beds are available and where.

Do we have enough beds? It’s a question that comes up a lot. One thing I often say about beds is that the research often shows that it’s not necessarily a bed that helps a person to move into long-term recovery. It’s having a range of community services and supports that a person can connect with, that often helps to make a difference in terms of recovery.

What is your reaction though when you hear the number of 1,038 state residents that died from accidental overdoses in 2017?

So it increases the importance  of our media campaign … to let people know these substances are deadly and dangerous. It lets me know there’s more we can do to get information out about these deadly substances. They are so deadly. Those substances are mixed in with heroin, so heroin is no longer pure. 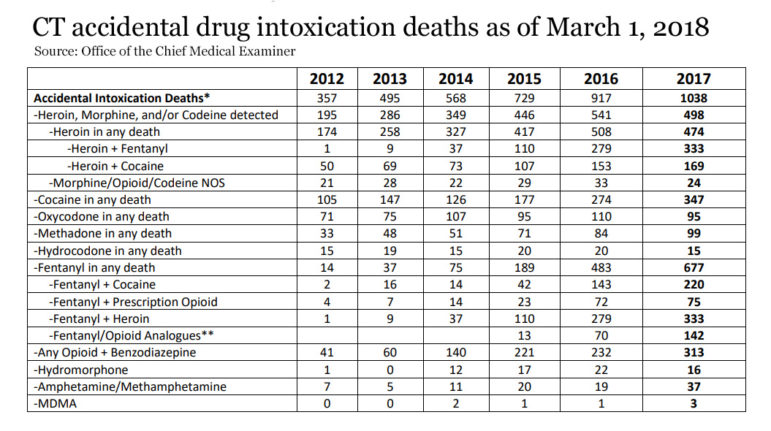 What do you think the state needs to do more of to see a decrease in overdose deaths?

One thing we’re doing as a state is taking a multi-level, multi-system approach.

We have initiatives where we’re collaborating, for example, with the Department of Correction, and we have an initiative where individuals coming out of Osborne [Correctional Institution in Somers] and going into the pre-release centers, if they had a previous history of opioid use or abuse, we have an initiative where we’re trying to start them on medication-assisted treatment before they resume their life in the community.

We know often if an individual is abstinent for a while and then they go back to their regular usage rates, their system is not used to the level of usage, so that can contribute to an overdose. So starting someone on MAT [medication-assisted treatment] before they move from prison back to the community, that can help reduce cravings so when they’re in the community they are less likely to overdose.

They’re an energized, passionate team of people in recovery that are bringing people such hope. They have already connected over 700 people to some form of services or supports. I think what’s wonderful about the model is that they really give people hope. They’re individuals in recovery themselves and they’re able to share their stories.

So this is happening right in the emergency department?

It’s happening in the ED, but it continues beyond the ED. The recovery coaches will stay with a person or family as long as that person or family allows them to remain in their lives. They will continue to call. So maybe right after a person overdoses, they’re not interested in treatment, but the recovery coach will call two, three, four times just to check in with the person, to see how they’re doing, if there’s any way they can help them in their recovery.

What they’re finding is more often than not, because they’re at a 96 percent connection rate … people eventually say yes to treatment. So that’s powerful. That’s saving lives.

Do you think we have enough affordable treatment options in our state?

We have a range of options, so the recovery coaches will help with system navigation. They help identify the different services and supports the person may need. In some instances, they may give them a ride or connect them with our access line, that is a 1-800 number.

There are clearly a number of initiatives being implemented. Where do you think the system has some deficiencies?

There’s a range of initiatives that we’re implementing — detox services, inpatient, outpatient, recovery coaches, also recovery community centers, and those are essentially drop-in centers where a person can go. Those are sites run by people in recovery. There is a call-line there as well.

So, in terms of what we could do more of, we’re certainly looking for federal grants, different funding opportunities, to scale up our recovery coaches. It would be wonderful if we could have more recovery coaches in more hospitals around the state.

What message would you want to tell a family member who is seeking treatment? What would you want them to know about what your department is doing and what is available in the state?

I would want them to know it’s important for them to have hope and to reach out to our department or their health care provider to try to get linked up with necessary services and supports. I would want them to know recovery is possible. They don’t have to go through what they’re going through alone. We have examples of people in recovery who are willing and passionate in fact about working with them and walking alongside of them as they’re working to achieve recovery for themselves or for their family member.

And the same question: what would be your message to someone going through addiction … what are your thoughts for them as the leader of this department?

I would want them to know a similar message — that they can move into recovery. Same thing, they don’t have to go through this alone, that there are a range of services and supports available, including recovery coaches who can work with them and walk alongside of them during their recovery process. 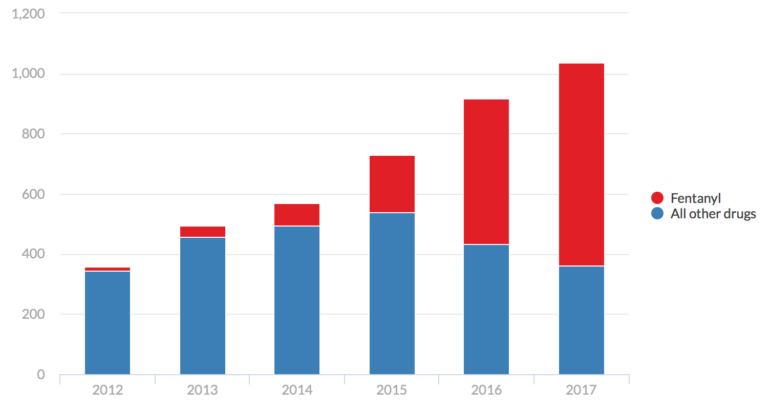 Drug overdose deaths in Connecticut since 2012 and their respective causes.