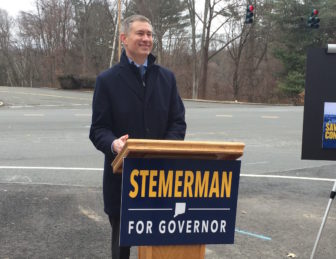 GOP David Stemerman launched his campaign for governor on Monday

FAIRFIELD — David Stemerman, a former hedge-fund manager from Greenwich, launched his campaign for governor on Monday standing in front of the former General Electric corporate headquarters, whose departure for Boston he blamed on “years of bad decisions by insiders in Hartford.”

Stemerman, 49, a Republican, emphasized his outsider status and outlined an agenda he said “career politicians and career insiders” would not enact. Stemerman, who has never run for state office, notified investors last September that he was closing Conatus Capital Management in December to launch a campaign for the Republican gubernatorial nomination.

A financial report from last October showed Stemerman had invested about $1.8 million in his campaign.

When asked if he was committed to participating in the Republican convention, Stemerman said, “The convention process heavily favors career insiders who’ve been at this for a very, very long time. I view that coming as an outsider from the business world, it puts me at a severe competitive disadvantage. I will engage with the delegates with an eye toward the convention, but I know there are many paths to the ballot here and we’re committed to being on the ballot in August.”

“The first responsibility of the next governor of Connecticut is to enact a balanced budget that is sustainable to restore confidence in our families and our businesses,” he said at Monday’s announcement. “The only way to achieve a balanced budget is by restructuring the agreement with our state employees.

“The current deal is unfair to everyone. It is unfair to taxpayers who are paying for benefits they cannot get themselves. It’s also unfair to state employees and their families because they’ve been promised benefits that the state has no ability to pay.”

“We will need to confront this ugly reality together to make changes Hartford insiders will resist,” Stemerman said. “A new agreement will have two key features — first it will provide assurances to state employees that their retirement benefits will be paid and, second, the taxpayer will exit the business of guaranteeing pensions and health care benefits.”

Stemerman also vowed to seek private investment to rebuild the state’s transportation system as a way to revitalize towns and cities.

“One of our big advantages used to be that we had best-in-class transportation services that connected us to New York and New England,” he said. “We need outside-of-the box thinking to rebuild our roads, trains and airports. We can do it by attracting billions of dollars of private investment.”

He said this work would include shortening rail commuting times to New York City and rebuilding the Bridgeport and Hartford airports into “major regional hubs.”

He also said the state education system could by improved by setting higher standards and “holding everyone accountable for meeting them.” He also said families should have the choice to send their child to the school “that is best for them, whether it is a local neighborhood school, a magnet, a charter, or a career and technical school.” 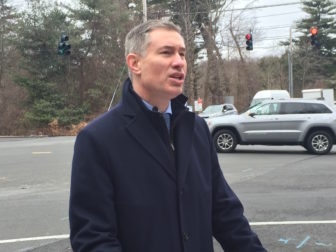 Stemerman is married and has five children. He has a bachelor’s degree from Yale and an MBA and law degree from Harvard. He opened his hedge fund in 2008. Bloomberg described it as “the biggest start-up of 2008,” when he raised $2.3 billion.

But 2018 offers Stemerman a race for an open seat with no dominant candidates in either party. Stemerman said on Monday that he will participate in the party’s next debate on Wednesday in New Canaan.