Rep. Rosa Rebimbas makes the case against the confirmation of Andrew McDonald.

By a single vote on Monday, the House of Representatives endorsed the confirmation of Andrew J. McDonald as chief justice of the Connecticut Supreme Court. His nomination goes to the Senate, where Republicans seem poised to block the promotion of the state’s first openly gay justice over issues the GOP says have nothing to do with sexual orientation.

The debate and 75-74 vote came after an unprecedented lobbying effort by supporters of McDonald, a former state senator and chief legal counsel to Gov. Dannel P. Malloy. For the first time, a Supreme Court nomination was the subject of a political campaign that included robo calls, digital ads and television advertising.

With the announced recusal of a Democratic senator, Senate Republicans will have an effective majority of 18-17 on McDonald’s confirmation in the evenly divided Senate. Malloy said he will not withdraw the nomination, and Senate President Pro Tem Martin M. Looney, D-New Haven, promised and up or down vote by the end of the month.

House Republicans focused their ire Monday on McDonald’s participation in a 4-3 decision that struck down the last vestiges of capital punishment in Connecticut. The decision spared the lives of 11 men on death row, including a duo convicted of killing the wife and daughters of Rep. William A. Petit, R-Plainville.

In 2011, the legislature repealed the death penalty, but only for future crimes — not those already on death row. It was an important political distinction calculated to win the votes of lawmakers unwilling to affect the sentences in the Petit case.

A composed Petit, who was elected to the House in 2016 after moving to Plainville, questioned McDonald’s judgment as he opposed the confirmation, never directly referring to the savage murders of his wife and daughters a decade ago in Cheshire. It was one of the five Democrats to vote against McDonald, Rep. Larry Butler of Waterbury, who grew emotional, accusing the justice of misleading the legislature in 2011.

The other Democrats voting no were Minnie Gonzalez of Hartford, Danny S. Rovero of Killingly, Bruce Morris of Norwalk and Liz Linehan of Cheshire. The only Republican in support was Rep. Livvy Floren of Greenwich.

Linehan waited until it was clear McDonald had the votes for passage, then cast a no vote. The Petit murders were in her district.

Abstaining were Rep. Tom O’Dea, R-New Canaan, a lawyer who recused himself over a case pending before the Supreme Court, and Rep. Angel Arce, D-Hartford, who has announced he is resigning from the House over inappropriate text messages with a teenaged girl.

Democrats and Republicans differed Monday on the question of which was the bigger threat to judicial independence and Connecticut’s tradition of avoiding overtly political debates over judicial nominations: The advertising campaign, or the prospect of legislators punishing a justice for an unpopular decision.

Rep. Steven Stafstrom, D-Bridgeport, quoted legal experts who have opined in letters to lawmakers that McDonald not only had no reason to recuse himself, but that canons of judicial ethics actually required his participation. “He must follow the rules and follow precedent,” Stafstrom said. 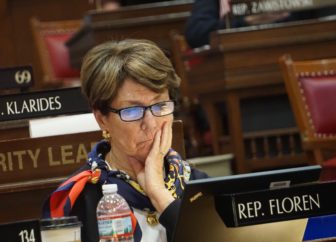 Rep. Livvy Floren, a Republican who supported McDonald, listening to the debate.

“He does his research. He gathers the facts. He analyzes data and he listens,” Floren said. “He really, really listens before making any decisions. His respect for the rule of law and his respect for the opinions of others are in his DNA.”

Floren served in the House with McDonald’s mother.

Before the debate, the House cast a possibly unprecedented vote to reject an unfavorable report from the Judiciary Committee on McDonald’s confirmation. The panel deadlocked 20-20 two weeks ago on McDonald, yielding the unfavorable recommendation.

The House voted 79-69 to set aside the report. But two Democrats, Butler and  Morris, later made clear their vote was intended only to place the nomination before the full House.

The GOP’s opposition opened with a 56-minute presentation by Rep. Rosa Rebimbas, R-Naugatuck, the ranking Republican on the Judiciary Committee. It began with a rebuttal of the suggestion that McDonald’s orientation was a factor in the GOP opposition.

“It is not based on sexual orientation,” Rebimbas said, noting the overwhelming bipartisan vote for McDonald’s confirmation as an associate justice five years ago. “That is false.”

She also denied allegations that Republicans were motivated by McDonald’s close relationship with Malloy, who employed McDonald as legal counsel while mayor of Stamford and officiated over McDonald’s wedding after same-sex marriage was legalized.

“The party affiliation of this governor has nothing to do with the qualifications of this individual,” Rebimbas said.

If McDonald’s nomination is blocked by the legislature, Malloy still will be able to nominate a chief justice, she said. No Republican leader in the legislature has suggested the GOP will try to block the governor, as congressional Republicans did to President Obama in the Democratic president’s last year in office.

Judges and justices are appointed to eight-year terms in Connecticut, and governors traditionally reappoint jurists, even if they originally were nominated by a governor of the other party. McDonald’s current term runs out in three years.

Rebimbas said McDonald’s refusal to recuse himself on the death penalty and a handful of other cases should concern all legislators, while she stopped short of saying his judicial career should end.

“I’m not saying that it concerns  me to the level that he should not conintue to serve as a justice, but what I am saying, it is concerning enough to me that it gives me great pause in supporting the nomination as chief justice,” she said.

“I think the debate was respectful,” Deputy House Minority Leader Vincent J. Candelora, R-North Branford, said after the vote. “Given the way the vote went down, I think it demonstrates it wasn’t a political decision. It was based on the information from the public hearing.”

Malloy urged the Senate to base its vote on McDonald “on a substantive and objective assessment of facts and not based upon a political calculation.”

House members watch the tally as votes are cast on McDonald’s nomination.