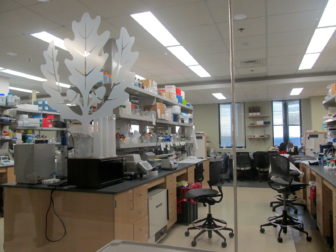 Washington – Universities across the United States spend hundreds of thousands of dollars every year lobbying in Washington, including the University of Connecticut and Yale.

A main reason: They are in a tight competition for a dwindling pot of federal research money.

According to the Center for Responsive Politics, universities and colleges spent more than $78 million lobbying Congress and federal agencies last year with the huge University of California topping the list at $1.2 million, followed by the University of Pittsburgh with $820,000 and Johns Hopkins University with $800,000.

There’s good reason these schools spent so much money. Studies show a correlation between lobbying money spent and the amount of money in federal grants a school receives.

Yale spent $600,000 last year on salaries and expenses for its in-house lobbying shop.

The university lobbied a laundry list of federal agencies, from the Department of Homeland Security to NASA.

“The Tax Cuts and Jobs Act raises very serious issues — while it cuts tax rates for corporations and individual taxpayers, for the first time in the history of the federal income tax, it taxes private colleges and universities,” said Richard Jacob of Yale’s federal relations office.

Jacob said Yale pushed back against congressional attempts to tax graduate students and has “concerns that the cap on the state and local tax deduction will over time impair states’ capacity to fund public colleges and universities appropriately.”

Yale also lobbied in support of the DREAM Act, a bill that would protect immigrant children who were brought to the United States illegally by their parents and are pursuing an education, work or service in the Armed Forces.

Yale spokeswoman Karen Peart said the school’s priorities did not change last year, despite the new Congress and administration. She said Yale lobbies on issues that reflect the school’s mission statement, “like the cost of higher education, immigration” and many other issues.

“Federal, state, and local relations are more important as society as a whole is questioning the value of a four- year education, and also the value of the research that is done at universities,” Peart said.

The rise in federal lobbying among universities began in the 1980s in response to budget cuts in research during the Reagan administration.

Joann Lombardo, senior director at UConn’s Office of Governmental Relations, said her school receives more than $200 million a year in federal research grants. UConn spent $320,000 lobbying the federal government last year for those grants – and for other things, including a green light for partnerships with Cuba on health care and agriculture issues.

Most of UConn’s lobbying is done in-house.

“We track all the hot-button issues,” said Lombardo.

That included congressional attempts to repeal the Affordable Care Act and proposed changes to a federal drug discount rule.

But the main job of UConn’s federal lobbyists is to try to include language in bills that would fund their projects. Since “earmarking” or putting special projects in federal bills, has been prohibited, other universities could compete with UConn for that funding.

UConn and Yale are among about 115 schools that are classified as “R1: Research Universities,” meaning they have the highest research activity in the nation.

There is intense competition among these schools for federal grant money, which has been on the decline and could be cut even more sharply if Congress adopts some of President Donald Trump’s budget proposals.

Jacob said universities have renewed concerns about funding for research.

“For example, the administration proposed a deep cut for the National Institutes of Health in fiscal year 2018, and it renewed old efforts to eliminate the National Endowment for Humanities,” he said.

Lombardo said UConn has to spend money on lobbyists to protect its sources of federal funding from competitors.

“We don’t want to be left behind,” she said.

UConn also hired the lobbying firm Clark Hill PLC to help. Lombardo said it’s important to have a constant presence in Washington that promotes the university’s work and keeps an eye out for funding opportunities.

Smaller schools in the game, too

The amount of money universities and colleges spend on lobbying in the nation’s capital doesn’t include the “unofficial” lobbying that occurs through educational visits with legislators and agency representatives. And they don’t include the influence that may be won through campaign contributions from university officials nor the money spent lobbying on the state level.

And it’s not only the big research universities spending money trying to exert their influence in Washington.

Quinnipiac University also has in the past hired a Washington lobbying firm — Nelson, Mullins, Riley & Scarborough — but doesn’t any more.

Don Weinbach, vice president of development and alumni affairs at Quinnipiac, said the firm was hired in 2012, just as the Affordable Care Act was implemented and the university was opening its medical school.

Weinbach said there were hopes the lobbyist could find some grant money for the medical school, which focuses on primary care, a key component of the ACA.

“But to no avail,” Weinbach said. “After three or four years of trying, we just said, ‘It’s not worth it.'”