Boost in federal transportation money unexpected, but welcomed in CT 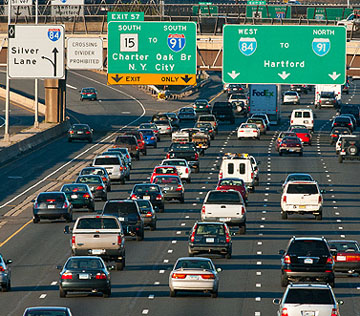 In the spending bill, which will fund the federal government until Sept. 30., Congress rejected President Donald Trump’s proposal that local governments and private entities pay more for the construction and upkeep of the nation’s infrastructure.

Instead of eliminating the popular Transportation Investment Generating Economic Recovery, or TIGER grants, as Trump proposed in his budget, the program received a $1 billion boost to $1.5 billion.

Connecticut Department of Transportation Commissioner James Redeker said the state will work with towns and regional councils to apply for about $45 million in TIGER grants, which are allocated on a competitive basis.

“We’re targeting the (projects) that have the best chance,” Redeker said.

The last TIGER grant the state received was $20 million for construction of a downtown crossing in New Haven.

Sen. Richard Blumenthal, D-Conn,, who appeared with Redeker at a roundtable in Norwalk Wednesday to discuss the best use of the new federal transportation money, said municipalities in the state should cooperate, not compete, for the money to put forward the best proposals.

“We want that money to be coming to Connecticut,” Blumenthal said.

Even more important to the state’s transportation needs is the omnibus’s increase in federal money for highways, roads and bridges every state will receive this year through a series of complex formulas.

Connecticut received about $703.7 million in 2017 in federal formula transportation funding. That could increase by about $25 million this year.

The federal gift comes with strings attached, however. There is a state share, of 20 percent or more, when federal money is used for a transportation project.

So far, the state has been able to secure that co-pay.

“We have never given up a federal dollar,” Redeker said.

But the commissioner also said the increase in federal funding was unexpected, and he will have to scramble to find new revenues from a cash-strapped state transportation fund.

On Wednesday, Gov. Dannel P. Malloy made another pitch for additional funding of the state’s  Special Transportation Fund, which he said will be in deficit in the fiscal year that starts July 1 if the General Assembly does not provide it with new revenue.

Malloy has proposed an increase in the state gasoline tax and tolls on some of Connecticut’s roads to boost revenues to the fund and prevent increases in rail and bus fares and service reductions on Metro-North, Shore Line East, and CTtransit bus services.

“The state has been forced to cancel or postpone $4.3 billion in projects across Connecticut, almost all of which are aimed at keeping our roads and bridges back in a state of good repair,” Malloy said. “We simply cannot afford to allow our infrastructure to fall further behind even as our neighbors make much-needed investments.”

In addition, the omnibus bill increased rail funding. Amtrak is provided with $1.9 billion, about $500 million more than in 2017. That money includes $650 million for the Northeast Corridor (NEC) and $1.3 billion to support the national intercity network.

Commuters on the Metro North railroad.

Also included is $250 million to address critical rail investments nationwide and on the NEC.

Redeker said he hoped Connecticut could get some of that new rail money, in partnership with Amtrak, to improve the tracks the state owns on the Greenwich to New Haven line.

Blumenthal said some of new rail grants could be used for work on the New Haven to Springfield line.

Trump threatened to veto the omnibus bill if it contained money for the Gateway construction project, a new tunnel under the Hudson River between New Jersey and New York. But Congress included $540 million to kick-start Gateway in the omnibus bill

Blumenthal said the new tunnel will help clear a bottleneck in rail travel to and from Connecticut. But he said the money in the omnibus for railroads is a “pittance” compared to what is needed.

“There has to be a major investment in rail,” Blumenthal said. “But the omnibus is a step in the right direction.”