Anger in the White House; missiles in Syria; politics everywhere

President Donald Trump had a lot to be angry about last week, starting with an FBI raid on his lawyer Michael Cohen’s offices and finishing with the impending release of former FBI director James Comey’s book.  Among other unflattering things, it depicts the president as “unethical, and untethered to truth and institutional values.”

In between the president’s angry tweets, a possible military strike against Syria was of considerable concern to the Republican administration as was House Speaker Paul Ryan’s decision not to seek re-election in November. The missile strike took place Friday night with general support from Congress — but with reservations.

The president’s anger over the latest moves by Special Counsel Robert Mueller in his Russia investigation inspired fresh talk of legislation protecting Mueller from improper dismissal, but no action.

Connecticut’s two Democratic senators, meanwhile, were apparently not enamored with the answers they were getting during confirmation hearings for Secretary of State nominee Mike Pompeo, or judicial nominee Wendy Vitter or the EPA’s second-in-command, Andrew Wheeler.

Blumenthal was dissatisfied with Vitter’s response to his question as to whether she believed the Supreme Court’s Brown v. Board of Education ruling was correct. “If you can’t affirm that the Supreme Court was right in desegregating schools,” he said, “you don’t belong on the federal bench.”

And, of course, what was Congress to do about Facebook, whose leader Mark Zuckerberg testified for two days about his company’s failure to prevent the misuse of the personal data of millions, and the appropriation of its platform by Russia and other nations to wage political, or actual, war? Blumenthal is among those who say it is time to impose some governmental regulations similar to those going into effect in Europe.

Over at the House of Representatives, all the members of Connecticut’s delegation were among those helping vote down a Republican balanced-budget amendment introduced after passage of the major tax overhaul (estimated to add $1.5 trillion to the deficit) and the $1.3 trillion omnibus budget bill.

U.S. Rep. John Larson, D-1st District, was probably the most vocal in condemning the amendment and its potential threat to Social Security and Medicare.

That omnibus bill included money for domestic programs and $160 billion in military spending — the latter of which disproportionately benefits Connecticut as compared to other states.

On Wall Street, Connecticut’s financial problems were not playing well. Moody’s Investors Service  warned that the federal tax changes could undermine Connecticut cities and towns’ property tax receipts. And on Friday, S&P Global Ratings downgraded the state’s credit rating from A+ to A, citing its already high level of bonded debt and a need for more borrowing to fix an aging transportation system.

Back in Connecticut, where some intractable state budget issues remain unresolved, House Speaker Joe Aresimowicz, a Democrat, is asking Republicans to give up their usual practice of proposing an alternate budget and to focus instead on a bipartisan plan. (Not likely.) Neither is it likely that several gaming issues before the legislature — or the legalization of recreational pot — will happen this year. 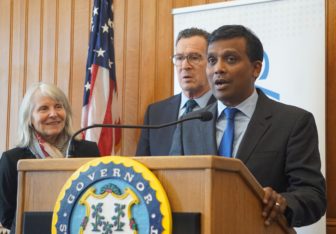 The State Bond Commission, meanwhile, approved $14 million in bonds to aid Infosys, an India-based information technology company, in developing a new training and innovation hub in Hartford — and with it 1,000 jobs.

In Middletown a bit of history involving a different kind of training was undone with the closing of the Connecticut Juvenile Training School — something Gov. Dannel Malloy called “an ill-advised and costly relic of the [Gov. John] Rowland era.”

Another school closing — the abrupt shutdown of the for-profit Ridley-Lowell Business and Technical Institute in Danbury and New London — was addressed by the U.S. Department of Education, which is offering students help in having their student loans discharged.

In those cities and elsewhere, the opioid crisis continues; and while a federal judge attempts to settle a long list of federal suits, Connecticut’s towns, including Waterbury, Bristol, East Hartford and Torrington, have chosen to sue Purdue Pharma and other opioid makers in state court. 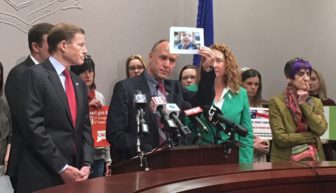 Mark Barden holds up a picture of his son Daniel,at a press conference on gun control in February attended by Rep. Elizabeth Esty, right.

With any luck, there will be plenty of judges to hear those matters, since Malloy has named 30 more potential jurists for the Superior Court.

On the political front, U.S. Rep. Elizabeth Esty continued to offer her explanation of why she mishandled the sexual abuse allegation against her former chief of staff; and gun-control advocate Mark Barden, a founder of Sandy Hook Promise, is weighing a run for Esty’s 5th District seat — the one she said she will not seek herself.

State Rep. William Tong is no longer considering a run for state attorney general — he’s committed to a full campaign for the job.