Bysiewicz gets publicity, but no money, from Emily’s List 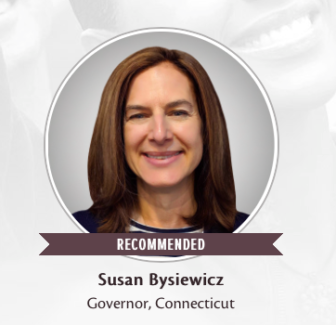 Only $25,000 of the $250,000 Bysiewicz needs to qualify for public financing — $1.25 million for a primary, and $6.5 million for the general election — can come from out of state, meaning that the endorsement will have little financial value unless Emily’s List decides to make independent expenditures on her behalf.

Bysiewicz raised $284,000 in an exploratory campaign, but her campaign claimed only $160,000 in qualifying contributions in a report filed last week with the State Elections Enforcement Commission. The report was prompted by the termination of the exploratory campaign on April 2 and does not reflect money raised in the past month.

“Susan is running in a crowded primary for an open seat, in a state that has not had a Democratic woman in its highest office in the last four decades,” said Stephanie Schriock, the president of Emily’s List. “She is a proven leader who will be a strong progressive voice for Connecticut families in Hartford.”

But Bysiewicz will not be getting a donate button on the group’s web site.

The group ultimately could play a significant role if it makes independent expenditures on Bysiewicz’s behalf through its affiliate, Women Vote! The affiliate spent $11 million on 22 races in 17 states in 2012. In 2016, it joined with AFSCME for a $2.5 million media buy on behalf of Maggie Hassan, the U.S. Senate candidate in New Hampshire.

A spokesman for the group said no decisions have been made on independent expenditures.

Joe Fox, a Washington-based consultant who is the senior adviser to the Bysiewicz campaign, said Bysiewicz was “delighted to have the Emily’s List.” (Fox is in a long-term relationship with Schriock.)

Emily’s List could play a more significant role in another Connecticut contest: The suddenly open race for the the 5th Congressional District seat. U.S. Rep. Elizabeth Esty, a Democrat, announced a month ago she would not run for re-election in late March after conceding she mishandled a sexual and physical harassment claim against her former chief of staff.

Esty had $1.5 million in cash for her campaign, but the candidates scrambling to succeed her are starting their fundraising from scratch.

Former First Selectman Mary Glassman of Simsbury is expected to seek an endorsement from  Emily’s List, but the group will stay out of a primary if another woman supporting abortion rights seeks the Democratic nomination. At least one other Democratic woman expected to run.

“That race is on our radar,” said Kristen Hernandez, a spokeswoman for Emily’s List.