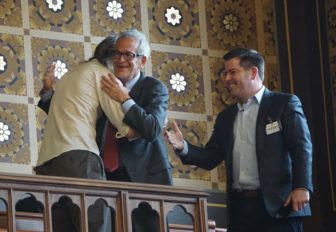 A decade-long lobbying campaign in Connecticut ended Saturday with a surprisingly strong 21-14 vote by the Senate for final passage of a bill committing the state to an interstate compact intended to sideline the electoral college and elect the president by the popular vote.

The national popular vote compact would not take effect until states representing 270 electoral votes — the magic number to elect a U.S. president — sign onto a compact that essentially is a constitutional workaround, a way to undo a 200-year-old element of the Constitution without amending it.

The addition of Connecticut’s seven electoral votes will bring the current tally to 172 — 98 short of a majority. Once activated, the compact would commit the state to cast its electoral votes on behalf of the winner of the national popular vote, regardless of who won in Connecticut. Other signatories include its bordering states: New York, Massachusetts and Rhode Island.

“A single vote, one person, one vote, is the way we should conduct all of our elections,” said Senate President Pro Tem Martin M. Looney, D-New Haven.

Republicans George S. Logan of Ansonia, Heather Somers of Groton and Kevin Witkos of Canton joined all 18 Democrats in support. The House passed it last week, 77 to 73, with one Republican in support and three Democrats opposed. Gov. Dannel P. Malloy promises to sign the bill.

“On this particular issue, it doesn’t matter if you are a Democrat, a Republican or a Libertarian: It’s about making your state relevant in the presidential election,” said Barry Fadem, the president of National Popular Vote. “If you’re not a battleground state, you’re irrelevant.”

Currently, the presidency is won or lost in a series of winner-take-all elections in every state but two, encouraging presidential campaigns to focus only on a dozen battleground states. About two-thirds of all general-election campaign events in 2016 were held in just six states: Florida, North Carolina, Pennsylvania, Ohio, Virginia, and Michigan.

“With the exception of the presidency, every elected office in the country, from city council, to United States senator, to governor, is awarded the candidate who receives the most votes,” Malloy said. “The vote of every American citizen should count equally, yet under the current system, voters from sparsely populated states are awarded significantly more power than those from states like Connecticut. This is fundamentally unfair.”

Opponents focused Saturday on details, such as who would certify a national popular vote, and broader questions about how a new method of electing a president might affect campaigning.

Sen. Michael McLachlan, R-Danbury, suggested that small states would be ignored in favor of large population centers if the election were settled by the popular vote.

“If you do that, large population areas are making the decision. There’s no more relevance for the smaller areas of the country. The way that requires you to build coalitions in the electoral college — there’s no reason to focus on that anymore,” McLachlan said. “You go to your strength areas, so the Democrats go to where the blue is and the Republicans go to where the red is, and everybody else can go to sleep.”

“I thoroughly believe that this compact is actually respecting the voter in every single state and is not disenfranchising other voters,” Flexer said. “And I take someone like my Republican father as an example. If this were to go into effect, someone like my father, a Republican in Connecticut, his vote would matter.”

President Trump won 41 percent of the vote in Connecticut, but Hillary Clinton was awarded all seven electoral votes.

“That Democrat in Oklahoma, their vote would matter, too, because they would all add into the national popular vote total, and all of the states that are a member of this compact are saying that we respect the total number of votes, who wins the most votes nationally in the presidential election,” she said.

Two of the last three presidents are Republicans who lost the popular vote: George W. Bush in 2000 and Donald J. Trump in 2016. But a swing of 60,000 votes in Ohio in 2004 would have given Democrat John Kerry the presidency, while losing the popular vote.

Correction: Nebraska and Maine apportion some of their electoral votes based on results in congressional districts. This was resulted to a split vote twice.