Holocaust bill gets a vote, and CT House gets a blessing 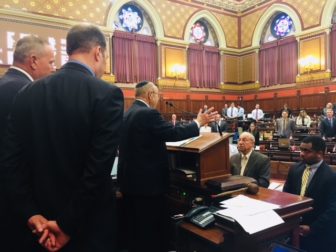 It was a unique ending to a legislative debate: Rabbi Philip Lazowski, a Holocaust survivor who has watched the rise of a neo-Nazi movement that denies history, blessed the House of Representatives on Monday after it unanimously passed a bill requiring schools to teach a lesson about genocide.

“I thank you from the bottom of my heart. This is a very important bill. In this, an election year, I wish you all good luck,” Lazowski said. “May God bless you for many years — and be with your family, your friends and have the joy of serving the people of Connecticut. God bless you.”

House Speaker Joe Aresimowicz, D-Berlin, and House Minority Leader Themis Klarides, R-Derby, embraced Lazowski, who serves as a chaplain to the state Senate, after the passage of a bill he had sought for many years, but for which he found a receptive and bipartisan audience in 2018. Aresimowicz offered him the dais.

Rep. Andy Fleischmann, D-West Hartford, co-chair of the Education Committee, said the state hasn’t done enough to educate students about “the dehumanization, the treatment of other people as other entirely, the segregation, the ethnic cleansing, and then the mass murder that is genocide.”

In a recent survey, two-thirds of millennials couldn’t identify Auschwitz, the largest and most infamous of the Nazi’s extermination camps, a place where more than one million people died, most of them Jews. One third of the world’s Jews were murdered during the Holocaust.

Fleischmann said the measure would enhance the humanity of every student, teacher and staff member at Connecticut schools.

“That’s what we want for our children and their children, that they have an encompassing view of humanity that ensures that they themselves would never be complicit in this terrible, terrible sort of crime,” Fleischmann said.

The bill would require Holocaust and genocide education and awareness as part of social studies curriculums at Connecticut public schools.

Rep. Tim LeGeyt, R-Canton, a former educator who is retiring from the House, said the bill has potential to mitigate and even reverse some ugly trends.

“Specifically, we need to help students understand that just as this happened in the past, our society could become frayed around the edges at any time, and through misguided and loud and unethical, even tragic and violent means, people can be subjected to this kind of treatment on a small scale, medium scale, large scale,” LeGeyt said. “And we have to be ever vigilant that that doesn’t happen.”

Rep. Bobby Gibson, D-Bloomfield, who is a teacher, said the bill meant more than just education about the Holocaust.