Manny Santos urging a delegate to switch his vote.

Mashantucket — Manny Santos, the former mayor of Meriden, won the Republican endorsement for the open seat in the 5th Congressional District on a second ballot Friday, but he faces a primary from at least one challenger, Ruby O’Neill, a founder of the National Latino Republican Coalition.

Nominations in the 5th District of western Connecticut unexpectedly became hotly contested in both parties after U.S. Rep. Elizabeth Esty, a Democrat, was pressured to quit her re-election campaign over her mishandling of a sexual and physical harassment complaint against her former chief of staff. The Democratic convention is Monday.

Santos won a three-way race with O’Neill and Rich Dupont, a businessman. All three won at least 15 percent on the first ballot, the minimum necessary to qualify for a primary in August. It was unclear if Dupont would go forward. He had 37 votes, one more than the bare minimum to qualify.

Endorsed without opposition in the other districts were: Jennifer Nye of Manchester in the 1st District, who volunteered when she realized the GOP was without a candidate; Danny Postemski Jr. of Hampton in the 2nd; Angel Luis Cadena Jr. in the 3rd; and Harry Arora of Greenwich in the 4th. 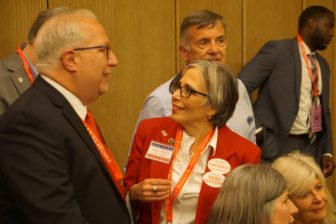 Santos, 49, an analyst at United Healthcare, noted he was the only candidate in the race before Esty’s exit.

“I took this challenge on before it became easy,” Santos said.

O’Neill, 64, a retired college professor and member of the state’s Latino and Puerto Rican Affairs Commission, touted her performance as a late entrant as a sign of strength. On the final ballot, Santos defeated her 135 to 97.

“I did all this in two weeks,” O’Neill said. “I am going to go forward with the primary. That’s what I’m thinking at this point.”

She is married to Rep. Arthur O’Neill, R-Southbury, the longest-serving Republican in the House.

The 5th District was the only contested race. All five conventions were simultaneously held at Foxwoods Resort Casino, where the GOP will endorse a candidate for governor Saturday.

In the 1st District of Greater Hartford, Nye did not realize she would be seeking the nomination until 90 minutes before the convention began. 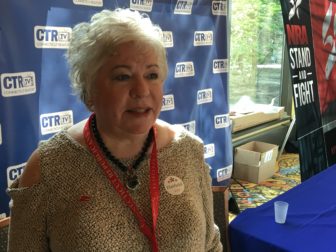 Jennifer T. Nye, the Republican nominee for Congress in the 1st District.

Nye, 60, a paralegal with two grown children, said she was appalled to learn the party had no one interested in challenging U.S. Rep. John B. Larson, who won the seat 20 years ago.

“Nobody should just get a pass,” she said.

An expected contest in the 2nd District of eastern Connecticut was avoided. State Rep. Kevin Skulczyck, R-Griswold, was nominated, then withdrew and endorsed Postemski to challenge U.S. Rep. Joe Courtney, who was elected in 2006.

Postemski, 32, a diesel mechanic and a Marine who saw active duty in Iraq in 2004 and 2006, did not shrink from his lack of experience in public office.

“I understand that I am an unknown quantity,” he said. “But I am a marine, and I am a fighter.”

Postemski said his campaign will focus on the need to preserve second-amendment rights against growing pressures. Democrats in Washington “are trying to say that anything that is semi-automatic is an assault weapon,” he said. 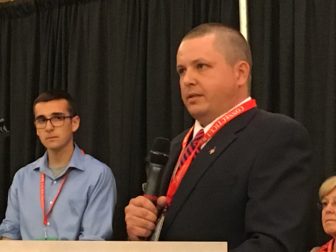 Danny Postemski Jr., the party’s nominee for Congress in the 2nd District.

In the 3rd District centered on New Haven, Cadena, 37, of Shelton, who also served in the Marines, was chosen for the second consecutive election cycle to oppose U.S. Rep. Rosa L. DeLauro, the longest-serving member of the Connecticut delegation.

In the 4th District of lower Fairfield County, Arora, an investment manager from Greenwich, accepted the Republican nomination to take on U.S. Rep. Jim Himes, who was elected in 2008.

Arora, 48, said he intends to be aggressive in challenging Himes for his seat.

“This race is not an easy race. The incumbent is entrenched … but I do intend to take the fight to him — house by house, street by street, Facebook friend by Facebook friend,” Arora said.

Arora emigrated from India when he was a graduate student and has never run for political office before.