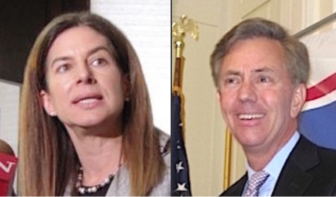 Democratic gubernatorial contenders Ned Lamont and Susan Bysiewicz have agreed to run together on a ticket topped by Lamont, a move to discourage a primary while Republicans battle in a summer-long nomination fight, sources said Monday.

With a growing number of prominent endorsements in recent weeks, Lamont had taken on the mantle of front runner going into the Democratic convention this weekend, but he had failed to close the deal on a running mate. Now, however, Lamont is expected to announce a ticket Tuesday.

Lamont was endorsed by New Haven Mayor Toni Harp, a former state senator whose urban base and deep knowledge of the state budget as former co-chair of the Appropriations Committee would have made her an attractive partner on policy and politics. Sources say she declined to consider becoming his running mate.

Bysiewicz, a former secretary of the state trying to make a comeback after disastrous runs for attorney general in 2010 and the U.S Senate in 2012, recently reached out to Lamont over the possibility of a Lamont-Bysiewicz ticket, sources said.

At the 5th District Congressional nominating convention in Waterbury on Monday, the choice was greeted with resignation, mostly by politicians who declined to comment on the record. One prominent official who is supporting Lamont said the partnership was “disappointing.”

Rep. Michelle Cook, D-Torrington, whose name had been floated as a possible running mate, said Lamont informed her of his decision in a phone call earlier Monday. Once the news broke Monday afternoon, she said, “My phone blew up.”

“I found it to be — I don’t know if perplexing is the right word,” Cook said.

But Bill Shortell, the Democratic chairman of New Britain, said, “Except for the fact we need people of color, it’s a very strong ticket.”

Lamont, his campaign manager and his spokeswoman did not return calls for comment, but well-placed Democratic sources said the talks of a partnership grew serious over the weekend and led to a face-to-face meeting Monday. Lamont’s campaign confirmed the deal to party officials and others who spoke to CT Mirror.

Bysiewicz did not return a call. Her senior strategist declined comment.

A ticket is not guaranteed to avoid a primary — or even a smooth convention. Other names still could be placed in nomination for lieutenant governor at the convention in Hartford, providing an early test to the Lamont campaign.

Lamont, who ran for U.S. Senate in 2006 and lost a Democratic primary for governor to Dannel P. Malloy in 2010, has opted out of the voluntary public financing system and is expected to largely self-fund this effort, as he did in his two previous campaigns.

Boughton called Lamont “part of the one-percent that has pillaged this state and the rest of the country.” That prompted a rebuke from Herbst.

“Republicans are never going to defeat the Democrats by channeling their divisive rhetoric that demonizes success,” Herbst said. “Republicans simply cannot afford to nominate a candidate who thinks the way to win in November or fix Connecticut is to channel the politics of Hillary Clinton and Elizabeth Warren.”