Lamont-Bysiewicz: ‘United, we have the best chance’ 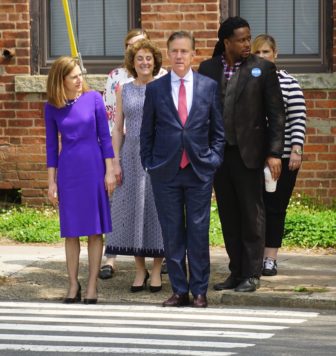 New Haven — Ned Lamont and Susan Bysiewicz glossed over scrapes and differences, the way political rivals do when they suddenly pivot, ending their competition for the Democratic gubernatorial nomination. The task now is to frame themselves as capable of offering a fresh take on governing to a state deeply unhappy with its Democratic governor.

Side by side, Lamont and Bysiewicz made their debut as the Lamont-Bysiewicz ticket Tuesday by leading a short procession of supporters from Lamont’s gubernatorial headquarters in a reclaimed industrial building up the block to a crosswalk, then across the street to reporters waiting on a plaza outside the East Rock Community Magnet School.

“I represent — Susan and I represent — a fresh start for this state,” Lamont said, brushing off a question about the impact of the departing Gov. Dannel P. Malloy. “I don’t want to sit around fussing about where we’ve been. I want to talk about where we’re going as a state. I think that’s how Democrats win, that’s how Connecticut gets going again.”

By quitting the race for governor to become Lamont’s running mate, Bysiewicz is acknowledging what has been apparent for weeks: Momentum was building for Lamont, 64, a wealthy Greenwich businessman who self-funded unsuccessful campaigns for U.S. Senate in 2006 and governor in 2010. He is self-funding again, an issue Bysiewicz raised recently.

Three weeks ago, Bysiewicz sharply challenged Lamont, who says he supports the state’s voluntary system of publicly financing campaigns, to follow words with deeds. She asked him to spend no more than the $1.25 million public grant available to qualifying candidates for a gubernatorial primary.

Bysiewicz said she will seeking public financing for her lieutenant governor campaign.

“We have a lot of agreement, actually,” Bysiewicz said. “United, we have the best chance.”

Lamont and Bysiewicz met Monday morning, closing the deal soon after. The partnership with Bysiewicz does not necessarily prevent a primary, but it drains drama from this weekend’s Democratic convention in Hartford and increases pressure on Lamont’s remaining rivals, Bridgeport Mayor Joseph P. Ganim, Sean Connolly and Guy Smith, to reconsider their campaigns.

Ganim, for one, says he can resist that pressure.

“Today’s announcement of a Lamont-Bysiewicz ticket changes nothing regarding our campaign,” Ganim said. “With almost 8,500 signatures of voters in hand, it is clear we have the support of the people to be on the August Democratic primary ballot to fight for economic, political and social justice. The people of Connecticut want change, not more of the same.”

Ganim needs 15,458 signatures from Democratic voters — 2 percent of the party’s enrollment — to qualify.

Over the weekend, Republicans endorsed Danbury Mayor Mark Boughton and qualified two others, Tim Herbst and Steve Obsitnik, for a primary, giving them the support of at least 15 percent of the delegates. Four others, including two businessmen who bypassed the convention with a direct-primary strategy, have taken out petitions. Republicans need 9,081 signatures.

“We decided very recently that we would form the strongest possible team for the Democrats, and I think we present a very strong contrast to the Republicans,” Bysiewicz said. “We just saw their very divisive convention, and we’re going into our convention united.”

Bysiewicz, 56, is a former secretary of the state whose career derailed in 2010 when she exited the race for governor to pursue the open seat for attorney general, only to lose a challenge over whether she met the statutory requirements for the job. Two years later, Chris Murphy decisively defeated her in a primary for the U.S. Senate.

Now, Murphy is playing the role of power broker, coordinating a statewide get-out-the-vote effort as he seeks re-election to a second term in the Senate and Malloy exits political life after two terms as governor and 14 years as the mayor of Stamford.

The lieutenant governor’s office often is a source of frustration to its holder. Other than presiding over the state Senate or serving should the governor become incapacitated, the office has no responsibilities or powers, other than those granted by the governor. Even Lt. Gov. Nancy Wyman, who was a full partner in Malloy’s two successful campaigns, has chafed at times at its limits.

It has been a poor political stepping stone in Connecticut, save for the times when a governor has resigned. That has occurred three times in the past 60 years: Abraham Ribicoff left to join the administration of John F. Kennedy, Ella T. Grasso resigned when she was dying from cancer, and John G. Rowland quit in the face of impeachment.

Two rivals teaming up for a ticket is a conventional move in an unconventional time, but Lamont still sees himself as an unconventional candidate, an identity forged in 2006 when he challenged U.S. Sen. Joseph I. Lieberman over the war in Iraq. He beat Lieberman in the primary, but Lieberman rebounded to win in November as a petitioning candidate.

One change that neither favors is a Republican insistence that the state radically overhaul its collective bargaining laws as they apply to public-sector employees, especially the state’s current policy of setting pension and retiree health benefits by negotiation, not imposing them by statute as is done in many states.

Lamont also sees electronic tolling as an inevitable change in Connecticut, a state struggling to keep up with an aging transportation infrastructure. Tolls may be unpopular, he said, but Republicans have offered no credible alternative.

The GOP may be campaigning as the party of change, but it bears much responsibility for the state’s current fiscal difficulties, he said. During 16 years of rule by two Republican governors, he said, the state did nothing to check the the growth of an unfunded pension liability that is one of Connecticut’s biggest challenges.

“They have never stepped up and done what we need to do to get this state moving again. So I’m happy to have that debate.”

Ned Lamont and Susan Bysiewicz lead a procession to their first press conference.