Ganim the last to oppose Lamont at convention 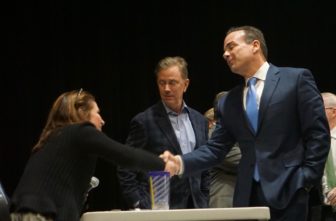 And then there were two: Joseph P. Ganim, right, and Ned Lamont are the two candidates seeking the convention endorsement for governor.

Intrigue over down-ballot races for lieutenant governor, treasurer and attorney general are expected to dominate this weekend’s Democratic convention as an unopposed U.S. Sen. Chris Murphy is nominated by acclamation for a second term Friday night and Ned Lamont is poised to win the endorsement for governor on a single ballot Saturday.

The crowded field of gubernatorial candidates seeking the convention endorsement has shrunk to two: Lamont and Bridgeport Mayor Joseph P. Ganim. Sean Connolly, the former veterans affairs commissioner, ended his campaign Thursday and endorsed Lamont, a Greenwich businessman who emerged as a front-runner in recent weeks.

Connolly is the third gubernatorial candidate to drop out of the race to endorse Lamont, following Jonathan Harris on April 27 and Susan Bysiewicz, who was introduced Tuesday as Lamont’s choice to be lieutenant governor. The deal with Bysiewicz was denounced by some urban Democrats who expected Lamont to pick a black or Hispanic running mate.

Eva Bermudez Zimmerman, who is of Puerto Rican descent, will oppose Bysiewicz for the nomination for lieutenant governor. She is holding a press conference with black and Latino office holders outside the convention in Hartford on Friday afternoon.

Guy L. Smith, a long-shot Democratic gubernatorial candidates who is bypassing the convention to petition for a place in the August primary, said Thursday his running mate would be Charlie Stallworth, a black minister and state representative from Bridgeport. But his campaign could not say if Stallworth would seek the nomination Saturday or petition.

Technically, no gubernatorial candidate can dictate the choice of a running mate. They run separately at the convention and in the primary. Only in November do they run as a team.

The easiest way to qualify for a primary is to get the votes of 15 percent of the convention delegates. The alternative is to gather signatures from 2 percent of enrolled voters in that party. For a Democrat, that requires 15,458 signatures.

Ganim, whose campaign has been hobbled by skepticism he could credibly compete in November after serving seven years in prison on charges stemming from extorting city contractors for kickbacks during his first stint as mayor, is both seeking the convention endorsement and petitioning. He said Thursday his campaign has collected 10,000 names.

The convention at the Connecticut Convention Center in downtown Hartford opens Friday with welcoming speeches from Gov. Dannel P. Malloy and Lt. Gov. Nancy Wyman, who are not seeking re-election after two terms.

On Saturday morning, delegates are scheduled to endorse Secretary of the State Denise Merrill and Comptroller Kevin Lembo for third terms. Neither faces competition for the nomination. Delegates then will vote by roll call on an endorsement for governor. The only question is whether Ganim will reach the 15-percent threshold.

Next on the schedule is balloting for lieutenant governor, then attorney general and treasurer.

Lamont’s selection of Bysiewicz, rather than a black or Hispanic candidate, is a complication in the race for treasurer, an office at the center of one of the most enduring traditions in Connecticut politics: Nominating a string of black politicians as treasurer, beginning in 1962 with the choice of Gerald A. Lamb as the first black state treasurer in the U.S.

Connecticut has elected four black candidates to statewide office, all Democratic state treasurers: Lamb, Henry Parker, Francisco L. Borges and Denise Nappier, who is not seeking re-election this year. The only black congressman from Connecticut was Gary A. Franks, a Republican elected to the first of three terms from the 5th District in 1990. No Hispanic candidate in the state ever has been elected to statewide office or Congress.

The Democratic candidates for treasurer are Arunan Arulampalam, John Blankley, Dita Bhargava and Shawn Wooden. All but Blankley are racial minorities.

Wooden is black. Arulampalam was born in Zimbabwe to parents of Sri Lankan descent. Bhargava is Indian. Blankley is white and British born. If he runs, Blankley would be trying to become the first white Democratic nominee for state treasurer since John Speziale in 1958.