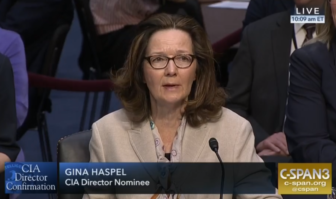 Washington – The Senate voted Thursday to confirm Gina Haspel as the first woman to lead the Central Intelligence Agency, a move that was opposed by both Sen. Richard Blumenthal and Sen. Chris Murphy.

The vote to confirm Haspel was 54-45, with most Democrats opposing the nominee and most Republicans supporting her.

“I struggled with this one,” Murphy said. “On one hand, I believe Deputy Director Haspel’s patriotism, knowledge and decades of experience would serve her well as director of the CIA. On the other hand, there are things she has done and overseen that can’t be justified or forgotten. Torture doesn’t work – it’s illegal and immoral, and it ultimately makes us less safe.”

Haspel told Congress she now feels the CIA should not have employed the harsh interrogation program used on al Qaeda detainees.

“I appreciate Ms. Haspel’s assurances that she would never again let that happen, but given her past, that’s a leap of faith I don’t believe the U.S. Senate should have to make when confirming a nominee for such a critical job,” Murphy said.

Blumenthal was tougher on the nominee, raising an allegation that Haspel was involved in the destruction of videotapes of CIA-conducted torture.

“Gina Haspel fails the moral-compass test,” he said. “She has failed to clearly and forthrightly state that decisions she made about torture and the destruction of evidence were morally wrong, not merely politically misguided.”

Blumenthal also said “a strong moral compass is especially necessary with this president, who seems to have none.”

Some Senate Democrats, including Blumenthal, had sought from the Justice Department — unsuccessfully — a classified report from John Durham, the special prosecutor who investigated the destruction of the tapes but did not press any charges. Durham is now the U.S. Attorney in Connecticut.

His report summary was made available to the Senate Intelligence Committee members, but not the full Senate.

Two Republicans opposed Haspel’s nomination: Sens. Rand Paul of Kentucky and Jeff Flake of Arizona. A third Republican, Sen. John McCain of Arizona, also opposed the nomination and urged other senators to reject it. But the ailing  McCain did not vote because he is home in Arizona.