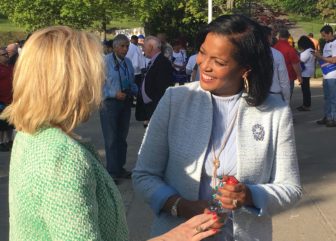 Hayes, a former national teacher of the year who was encouraged to run for the open seat in the 5th Congressional District by U.S. Sen. Chris Murphy, said she was heartened by her close finish Monday behind the winner, former First Selectman Mary Glassman.

“After weighing this decision very seriously and consulting my family and many of my fiercest supporters, I do believe that there is no denying that what happened Monday was nothing short of amazing and that my candidacy has ignited a desire for change,” Hayes said. “My campaign is about everyday people and the power that we have to make a difference in our communities and be better, together.” 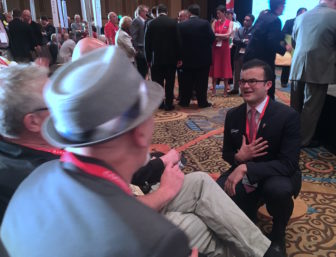 Treasurer candidate Art Linares asks delegates if they would switch their vote to support him at last weekend’s Republican convention.

At the GOP convention on Saturday, delegates endorsed Thad Gray for state treasurer over Art Linares in another close race. Gray led after all delegations voted, while Linares briefly pulled into the lead on vote switches, before Gray ultimately won.

A convention vote of at least 15 percent qualifies a challenger for a primary.

Linares said he took several days after the convention calling supporters to see if they still would back him in a primary and was encouraged by the response.