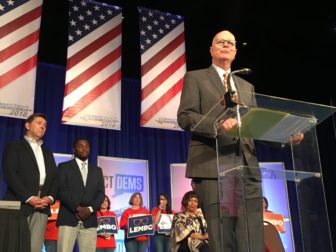 Democrats nominated the unopposed Comptroller Kevin P. Lembo by acclamation and Secretary of the State Denise Merrill by a roll call vote Saturday, an easy warmup before tackling contested endorsements for the other underticket offices of attorney general, treasurer and lieutenant governor.

Merrill, the only incumbent other than Lembo running for re-election to a statewide constitutional office, was endorsed by a margin that saved her from a primary with her sole opponent, Karen Talamelli Cusack of Woodbridge. Merrill won 89 percent to 11 percent.

Voting for secretary of the state was delayed over the failure of some delegates to register using a new electronic tally system. The delays gave candidates in the other races time to criss-cross the floor of the Connecticut Convention Center in Hartford.

“We have made Connecticut’s state finances among the most transparent in the nation,” Lembo told the convention in his acceptance speech. “That didn’t come easily. The body of government isn’t always keen on the idea.”

The comptroller, who launched the state’s searchable online database on spending and revenues, also has pressed to mandate independent analyses of the hundreds of millions of dollars in economic incentives Connecticut provides annually to businesses.

“We’re talking about the people working to exhaustion to reach the middle class or hold on to their place in the middle-class —  people who wonder, sometimes, if their government even thinks about them anymore,” he said.

Lembo also jabbed at state Republican leaders, warning their refusal to criticize President Trump would harm the GOP in November.

“Do you really think that you can emerge from behind the veil of silence, in the calm between tweet-storms, and pretend you’re something new? Something different?” Lembo said. “You obviously think the people of Connecticut have not been paying attention. The voters are not chumps. They’re not stupid.”

Lembo and his husband, Charles, live in Guilford with their three children. Lembo’s son, Charles, delivered the seconding speech for his father’s nomination. 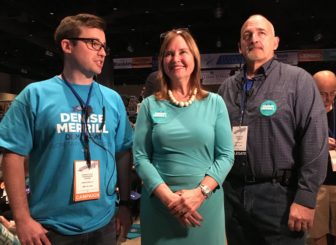 Incumbent Secretary of the State Denise Merrill listens to speeches nominating her for her third run for the office.

Merrill, whose office oversees state elections, had a good sense of humor about the tabulation problems that delayed her confirmation as the party nominee for a couple of hours.

“The irony of this being the nomination for the secretary of the state has not escaped me,” she said.

Merrill thanked her fellow Democrats for supporting her not only at the convention, but throughout her first two terms as they backed one initiative after another to expand access to voting.

“I have dedicated my career to bringing more people into the political process,” she said. “It has been the honor of my life to serve as your secretary of the state.”

“We’re seeing the results,” she said, adding that more than 150,000 new voters have been added to the rolls through the automatic renewal process alone. “We have more registered voters than ever before in Connecticut. … It’s working.”

The Democratic candidates for treasurer are Arunan Arulampalam, John Blankley, Dita Bhargava and Shawn Wooden. All but Blankley are racial minorities.