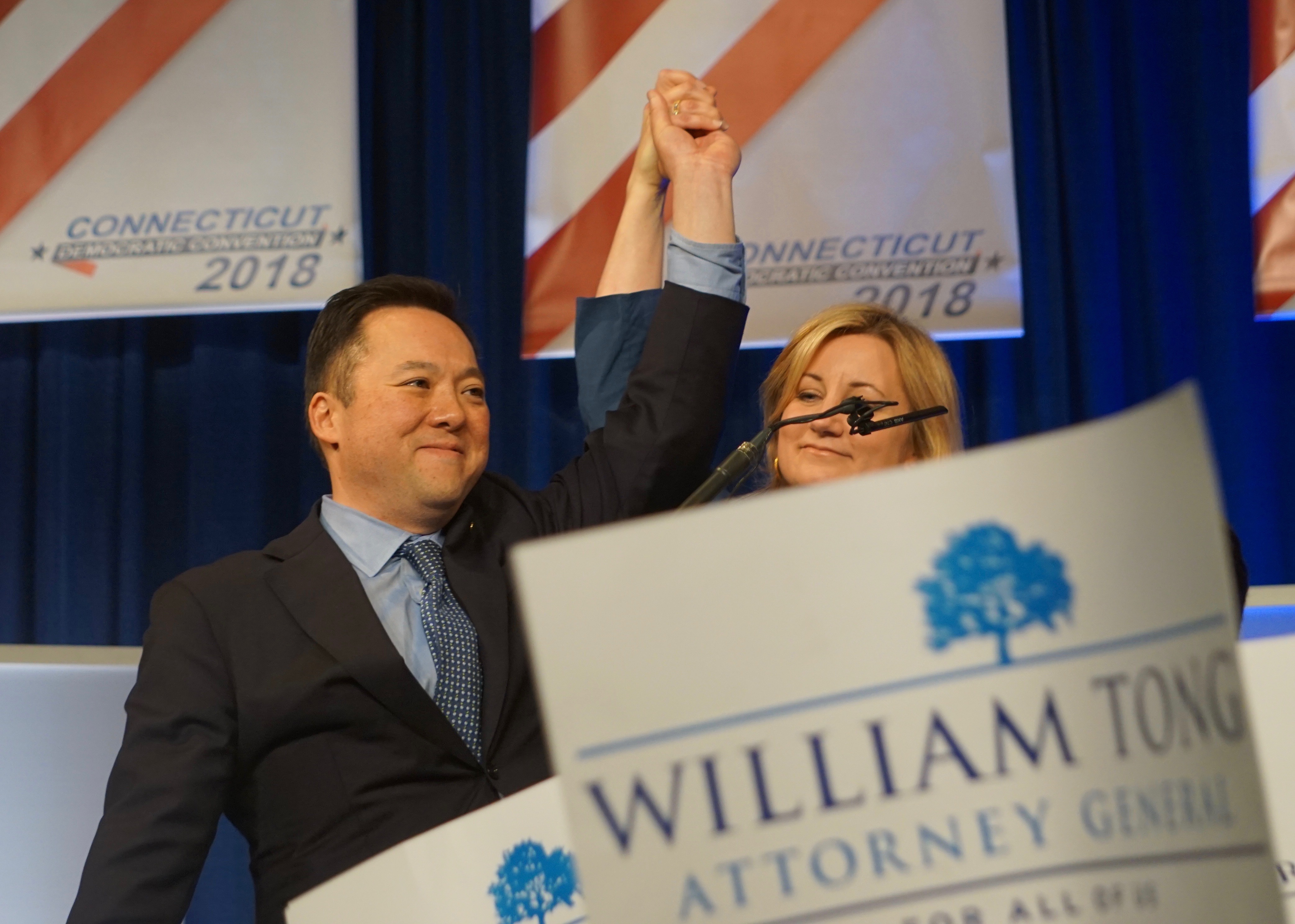 William Tong celebrates his endorsement as attorney general with his wife Elizabeth.

Rep. William Tong of Stamford won the Democratic endorsement for attorney general Saturday, but will face former federal prosecutor Chris Mattei of Hartford and Sen. Paul Doyle of Wethersfield in a three-way primary for the nomination.

Tong captured the endorsement on the second ballot after no candidate reached a majority on the first ballot. Assistant Attorney General Clare Kindall of Bloomfield threw her support to Tong while the first ballot still was open, conceding she had no path to the 15 percent required for a primary. 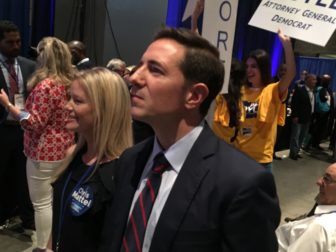 Chris Mattei and his wife, Joy, listening to nominating speeches for attorney general at the Democratic State Convention.

“This party has done something incredible,” Tong said after becoming the first Asian-American to be endorsed by the Democratic convention in Connecticut for a state constitutional office. “We’ve made history.”

Tong is the son of Chinese immigrants, and he noted with a laugh the delegates are aware he grew up working in their restaurant, a reference to a standard element of his campaign biography and stump speech.

Connecticut Democrats have made themselves a party of inclusion, he said, for immigrants, women, gays and others deprived a voice elsewhere in society. “Thank you for being the party that empowers us and gives us a chance to have a real seat at the table,” he said.

Tong, who is House chairman of the General Assembly’s Judiciary Committee, added that the Trump administration has made these and other under-represented groups “feel like we have a target on our backs. They’re coming after us and we have to fight back.”

As attorney general, Tong added, “I will be the first and the last line of defense to protect our way of life in Connecticut.” 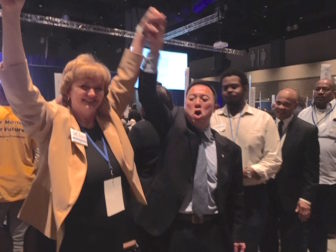 Clare Kindall walks arm-in-arm with William Tong to urge her delegates to back Tong for attorney general at the close of the first ballot.

Tong came close to winning the convention endorsement on the first ballot, taking nearly 46 percent of the ballots. As Kindall realized she would not clear the 15-percent threshold for a primary, she tried to steer delegates to Tong by walking down the convention aisles hand-in-hand with him while his supporters chanted, “Thank you, Clare! Thank you, Clare!”

Mattei finished with 33 percent and Doyle with 16 percent. Having qualified for the primary, Doyle released his delegates and removed himself from the second ballot, which ended with 63 percent for Tong and 37 percent for Mattei.

“When I started my campaign in January, I said I wanted the opportunity to bring my campaign to the voters, the Democratic Party today granted me that wish,” Doyle told the convention. “I qualified for the primary. I do not want my name to be drawn in the second round, and what I want to happen, I’ve made no deals, I want the Democratic Party to decide who will be the endorsed candidate for attorney general.”

Mattei, who explored running for governor before committing to the race for attorney general, said he was confident.

“We feel really good about our chances in a primary,” Mattei said afterward, adding that his campaign has qualified for public financing and drew strong delegate support from major Connecticut cities — all of which traditionally hold considerable sway in a Democratic primary.

Mattei, who led the prosecution of former Gov. John G. Rowland for campaign fraud, said that what voters “really want to see is an attorney general who has fought abuses of power at the highest level.”

Attorney General George Jepsen, a Democrat, is not seeking re-election to a third term.