Washington – As it happens after every mass shooting, there will be new calls here this week for Congress to consider dozens of gun control bills that began to be introduced after the Newtown shootings.

While the latest mass shooting in a Santa Fe, Texas high school may not move those long-stalled bills, the escalation of high-profile gun violence has made gun control a hot issue in this November’s elections.

“On Friday, a gunman used his father’s shotgun and a .38 revolver to kill 10 students and educators and injure others in Santa Fe High School in Texas,” said Newtown Action Alliance President John Kelly in a statement. “We have warned Americans that if a mass shooting can occur in Newtown, Connecticut, then it can happen anywhere in the United States.” 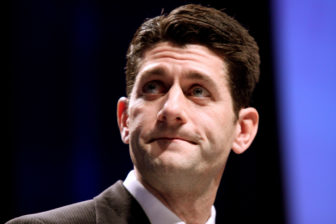 Kellly demanded Ryan “reject all money from the gun lobby and immediately call a vote,” on 56-gun violence-related bills introduced in the U.S. House.

But Kelly’s statement also disclosed why it’s unlikely there will be any action in Congress on gun control. It cited a Center for Responsive Politics analysis that said 232 – or a majority — of the 435 members of the House of Representatives received money from the gun lobby in 2016, with Ryan one of the highest recipients.

The National Rifle Association also spends tens of millions of dollars on ads attacking congressional candidates who support gun control, and this is an election year.

While the House has ignored most gun-related bills, there have been votes in the Senate since the Newtown shooting on several pieces of legislation, including one that would expand FBI background checks of gun purchasers. But those bills failed to win 60 votes needed to overcome filibusters.

After the Santa Fe shooting, gun rights supporters like Texas Lt. Gov. Dan Patrick blamed a number of things, besides guns, for a spate of school shootings that include the murder of 17 students and educators at a high school in Parkland, Fla. In February.

Since Friday’s massacre in Texas, reasons given by Second Amendment supporters for the uptick in school shooting include violent video games, the elimination of religion from public schools, the breakdown of families, unarmed teachers, too many entrances in school buildings and a lack of mental health care for troubled teens.

The frustration of lawmakers who want to tighten federal gun laws grows with every mass shooting.

“Let’s call it like it is: the horrifying inaction of Congress, slaughter after slaughter, has become a green light to would-be shooters, who pervert silence into endorsement,” Sen. Chris Murphy, D-Conn., tweeted after news broke on Friday of the Santa Fe shooting.

While Congress may not pass any new gun laws this summer, a growing number of congressional candidates – mostly Democrats — are campaigning on the issue, taking aim at the NRA.

Albuquerque, N.M. city council member Pat Davis is one of them.

On Friday, he began running a television ad condemning the NRA and inaction by U.S. lawmakers on gun control, beginning a 15-second spot with the words “F— the NRA.”

A former Washington, D.C. police officer, Davis is competing in a six-way race for the Democratic nomination for an open congressional seat.

Gun violence is also expected to become a major issue in Connecticut races for Congress, especially in the 5th District, home to Newtown, which has an open seat with the decision of Rep. Elizabeth Esty to forgo re-election.

Gun control groups have also stepped up their ad campaigns this year, receiving a boost from students around the country that have released their own ads for  stricter gun control —  many of them created by students of Marjory Stoneman Douglas High School in Parkland, Fla.