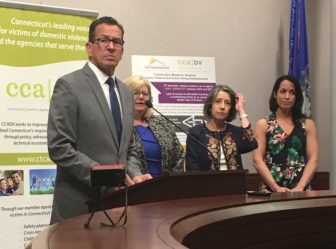 A new partnership between two state advocacy groups is enabling the state to provide more housing for the victims of domestic violence than either organization could alone, they and state officials say.

“There is no question that the intersection between domestic violence and homelessness is in existence in a very strong way,” Jarmoc said. “We know that domestic violence can often be a primary source of housing insecurity for so many survivors and their families.”

Jarmoc said the newfound relationship between the advocacy groups has enabled the organizations to “house families that are living in domestic violence shelters in ways that we have never seen before.”

The partnership was launched in response to a massive overcrowding problem that persisted in domestic violence shelters statewide, which were consistently functioning at 125 percent capacity. The issue, advocacy leaders said, was rooted in a housing shortage for survivors as well as conflicting state and federal policy mandates on how individuals should access housing.

To address the housing conflicts, the organizations adopted a system that ensures the confidentiality of survivors while allowing them to register for housing through the state’s Housing Management Information System. The system differs from the federal Housing of Urban Development’s registry program, which requires victims to identify themselves in order to request housing.

“We are able to serve more people in need than either of our organizations could do alone,” said Chief Executive Officer of the CCEH Lisa Tepper Bates.

Since its adoption in January 2017, the system has housed or begun the process of housing 28 single adults and 45 families affected by domestic violence, totaling 73 households.

The collaborative model has garnered national attention from HUD and a variety of state and federal housing coalitions.

“There is a consortium of federal technical assistance providers funded through HUD who been reaching out to us for guidance,” Jarmoc said. “I can’t underscore enough how important the work has been for Connecticut, but it’s now going across the country in terms of how other states can work together.”

The program’s success coincides with Connecticut’s increased focus on housing development throughout the last seven years, according to Gov. Dannel Malloy.

“This work was made possible because over last couple of years we have added thousands of units of housing,” Malloy said at a press conference Thursday. “We took some of that housing to end chronic homelessness among veterans, homelessness among veterans, and now ……we are working especially hard on providing housing for domestic violence survivors.”

With federal funding for affordable housing waning, Connecticut has allocated a great deal of state resources to address housing shortages, officials say. The state relied largely on funding from the state Department of Housing  as well as other departments to spur development, resulting in a 24 percent decrease in homelessness since 2007.

“Despite difficult financial times, this administration has been committed to making sure that housing resources are available to everybody and we are doing everything we can to combat homelessness,” said Sen. Mae Flexer, D-Danielson.

In addition, Flexer said, the state has been “very focused on improving our policies with regard to domestic violence.”

The Malloy administration has endorsed a number of efforts within the past year to increase protection for domestic violence survivors, including removing firearms from anyone who becomes subject to a restraining order,  strengthening the state’s anti-violence and anti-stalking laws, and signing legislation that will equip law enforcement with training to identify primary aggressors.

“They’re doing that in Washington and we’re doing this in Connecticut,” Malloy said.

The joint partnership between two of the state’s largest advocacy groups for housing and domestic violence protection will maximize the organization’s joint resources and continue building on Connecticut’s efforts in regard to domestic violence and housing development, Tepper Bates said.

“Service providers in Connecticut really can provide more value when we decide to come together and think in new and collaborative ways about how to make more of the existing resources we have.”