The governing board of Connecticut’s 12 community colleges voted Thursday to move forward with implementing a new plan to merge the schools into a single accredited institution — but this time in five years.

The vote by the state Board of Regents for Higher Education pushes back the merger of the 12 schools to 2023, hires three regional presidents in the spring of 2019, and saves an estimated $17 million compared to the $23 million originally proposed.

Mark Ojakian, the president of the Connecticut State Colleges and Universities system, said the new plan would develop a slower and more deliberate academic planning process, while also allowing the system to act more cohesively as it moves toward a single accreditation.

“At the heart of this is our need to stabilize financially our community college position into the future,” Ojakian said. “We also recognize that we need more time to get the foundation in place for a change of this magnitude.

The plan would still create a regionalized structure and align curricula for more than 200 degree programs. But it would maintain the current academic department chair structure, and gradually shed 117 administrative and other full-time equivalent positions compared to 163 proposed in the first plan. A contentious part of the original plan was the proposed removal of department heads. 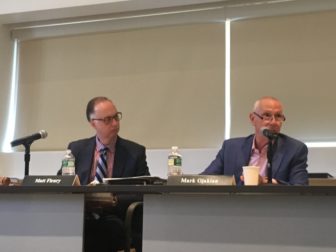 Board of Regents Chair Matt Fleury, left, and President Mark Ojakian at the board meeting Thursday.

The new pitch comes after the New England Association of Schools and Colleges (NEASC), a regional accrediting body, rejected the original proposal in April. NEASC Chairman David P. Angel wrote to Ojakian that the commission didn’t believe that plan was realistic.

Some faculty and former officials remain opposed to the plan while slightly softening their disapproval. No one spoke in opposition to the revised proposal at the Thursday board meeting.

Serafin Mendez-Mendez, a professor at Central Connecticut State University who has been critical of the “Students First” plan, said the new proposal is a lot better than the Regents’ previous plan, but said officials should still gather more input from faculty.

CSCU faculty and former presidents have voiced months-long opposition to the plan while the Board of Regents has persisted in trying to implement it. Those resisting the plan have had concerns about campuses losing their autonomy, losing their community connection, and that student services would suffer.

Merle Harris, the board’s academic and student affairs committee chair, said the committee was concerned about maintaining community connections at each campus, but is confident they will be preserved through the new plan.

Cathryn Addy, the former president of Tunxis Community College in Farmington, said she is concerned the regionalization will add another layer of decision-making and questioned if all options have been explored.

Addy said she supported giving the process more time and reinstating department chairs, but maintained her other concerns and doubted the plan would save money.

Naomi Cohen, the board’s human resources and administration committee chair, said her committee is evaluating the qualities and the titles needed for all of the system’s leadership positions.

Ojakian said once the merger is formed, each campus will still maintain a chief executive officer, chief academic officer, and a chief financial officer under direction of the three regional presidents and the overall college president.

“Through our regionalized effort, we believe that we can continue to collaborate, to share resources, and to save money to reinvest that money into places that students need and also begin to make some enrollment and transfer opportunities easier for students as we transition towards a single institution,” Ojakian said.

Board of Regents Chair Matt Fleury kept his comments about the new plan brief, but noted it was reviewed extensively by the different board committees.