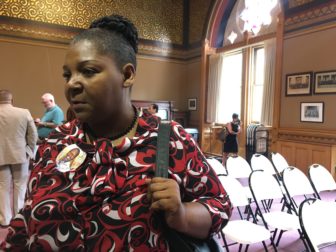 Anna Marie Perkins talks to reporters after the ‘Getting to Zero’ campaign launch.

New Haven resident Anna Marie Perkins watched her son stop taking his HIV medication and succumb to stage 4 lymphoma before dying in 2017. On Wednesday, Perkins joined state public health officials as they launched a campaign to phase out new HIV infections, saying she learned first-hand how stigma surrounding the illness can lead to tragic consequences.

“I know a lot of times I used to hear how they say you don’t die from the HIV virus, you die from the complications, but sometimes not only the complications are what kills you—it’s the stigma of people, the ignorance, the lack of knowledge,” said Perkins, whose son Lamar died at the age of 29.

The new Connecticut Department of Public Health (DPH) campaign, dubbed ‘Getting to Zero,’ will attempt to dissipate new HIV infections, AIDS-related deaths, and stigma and discrimination surrounding HIV/AIDS. Public health officials announced the campaign at the state Capitol before a room of advocates and people diagnosed with the virus, some clad in red shirts bearing the ‘0-0-0’ slogan.

Officials said programs will launch in Connecticut’s five cities with the highest number of people living with HIV—Bridgeport, Hartford, New Haven, Waterbury and Stamford. Each city will work with a new 23-member commission of advocates, at-risk residents, and researchers to form individual teams.

According to DPH, about 50 percent of HIV cases in Connecticut in 2016 were among men having sex with men. Black women in Connecticut are living with HIV at a rate roughly 12 times that of white females.

The campaign will also focus on developing recommendations, and forming listening sessions with HIV populations to understand barriers preventing or inhibiting them from receiving effective treatment services. 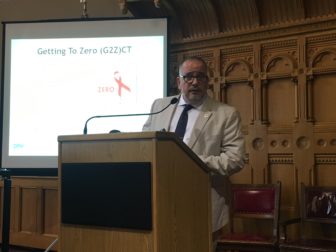 Connecticut Department of Public Health Commissioner Raul Pino speaks at the ‘Getting to Zero’ campaign launch.

DPH Commissioner Raul Pino said the campaign wouldn’t have been possible without federal funding.  DPH is not utilizing any state financing.

“This is a comprehensive plan this is not just launching a campaign,” Pino said. “We have to develop a strategy at our state lab to increase capacity for HIV testing, which will be done for free for those who don’t have the resources to pay for it.”

The agency is also going to revamp its Connecticut AIDS Drug Assistance Program (CADAP), which pays for medications for eligible people who have HIV, Pino said. The commissioner said the program will be more effective, rapidly respond to needs, and increase its capacity.

“I hope that the work of this commission around transgender women can help us to step out of the shadows and step out of some of the places that we’ve been pushed into,” she said.