Despite investigation, Obsitnik not giving up on public financing 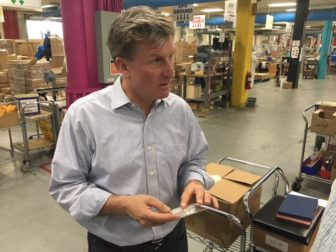 The Republican gubernatorial campaign of Steve Obsitnik said Friday that the investigation opened Wednesday by the State Elections Enforcement Commission does not rule out eventual approval of its application for $1.35 million in public financing under the Citizens’ Election Program.

But Dan Debicella, the former state senator who became manager of the campaign two weeks ago, also conceded that Obsitnik has no contingency plan for financing a credible campaign should the commission be unable to quickly resolve questions about its application for the public-financing grant.

“Quite honestly, we need that money to be competitive,” Debicella said. “Steve is not a self-funder.”

The five-way Republican primary is Aug. 14, and the earliest the commission could act on Obsitnik’s grant appears to be July 12. Obsitnik is facing two Republicans who qualified a week ago for public financing, and two others who are self-funding or largely self-funding their campaigns for the GOP nomination.

The commission’s investigators are scrambling to answer two questions: Did the Obsitnkik campaign illegally raise campaign contributions needed to qualify for public financing? And did it improperly coordinate activities with FixCT, Inc., an independent-expenditure committee promoting Obsitnik?

One bit of good news for Obsitnik is that a commission lawyer told the campaign the panel is willing to act on the grant application before the coordination investigation is closed, Debicella said. But the commission cannot approve the grant until investigators determine the legitimacy of the qualifying contributions to Obsitnik’s campaign.

To obtain public financing under the voluntary Citizens’ Election Program, a gubernatorial candidate must raise $250,000 in contributions ranging from $5 to $100. Each donation is accompanied by paperwork that is checked by commission staff to ensure the money actually comes from the stated donors.

“We’re not making any determinations on his grant until we get all the information we need. We’re working on that right now,” said Michael J. Brandi, executive director and general counsel of the commission. Brandi said he is unable to comment further on the issues arising from Obsitnik’s application.

Time is an issue. No grants for a primary will be paid this year after July 27, and the final application deadline is July 20. Debicella noted that John P. McKinney, a Republican candidate for governor in 2014, did not get his grant until mid-July.

“We’re still in the window where we can effectively spend the money, if we get the grant,” he said.

In a resolution authorizing the inquiry, the commission said it was “based on facts discovered in the course of a staff validation of a Citizens’ Election Program grant application, into potential campaign finance violations pertaining to the solicitation on behalf of and the receipt of contributions by the Obsitnik for Connecticut committee.”

CT Mirror reported Monday that FixCT, Inc., a group formed by one of Obsitnik’s early supporters, has raised $137,000 and spent $112,000, mostly on digital marketing by Connect Strategic Communications, which briefly worked for Obsitnik’s campaign last year as its email vendor. When there is a shared vendor or staff, there is a rebuttable presumption of coordination by a company and IE committee.

But the commission did not indicate the basis for the coordination investigation.