Lamont gets an endorsement, challenges GOP on abortion 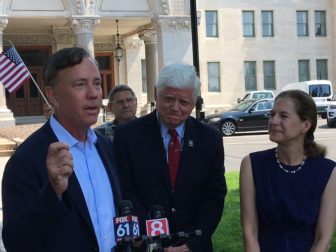 “I can’t think of a better leader for this time than Ned Lamont,” Larson said, during a late morning press conference outside the Capitol, adding that the Greenwich businessman particularly is focused on the need to grow jobs and foster economic development.

“This is a person who gets it and understands and can bring something unique that I don’t believe anyone else in the field can,” Larson added, “and that is a business acumen and understanding of exactly what the state needs to do.”

Larson also praised Lamont’s focus on the need to invest more heavily in Connecticut’s transportation infrastructure. Lamont has said he is open to electronic tolling as a means to upgrade an outdated, clogged transportation network.

Former Secretary of the State Susan Bysiewicz of Middletown, Lamont’s running mate, also drew praise from Larson, who endorsed her in the race for lieutenant governor.

“In this case I believe he (Lamont) has chosen well,” Larson said of Bysiewicz, who also served in the state House of Representatives adding that with her credentials, she could, “on day one, could take over, if necessary.”

Bysiewicz is being challenged for the nomination by Eva Bermudez Zimmerman of Newtown, who has never held state office.

Lamont, who is being challenged by Bridgeport Mayor Joseph P. Ganim for the Democratic gubernatorial nomination, thanked Larson and said, “I am going to be focused like a laser beam on job creation,” involving job training, working with colleges and universities and small and large businesses, and investing in transportation.

With President Trump expected to nominate a new justice for the U.S. Supreme Court who would support an overturn of Roe v. Wade, Lamont said Connecticut needs to know where Republicans stand on abortion rights.

“Are they going to stand with Connecticut values or Donald Trump on this issue?” Lamont said. “It’s a litmus test, I think, in terms of what type of state we’re going to be.”

“The states are a firewall against the bad policies that coming out of Washington, D.C.,” Bysiewicz said.

Connecticut is one of just a handful of states that have enacted declarations affirmatively protecting a woman’s right to choose an abortion. The state Supreme Court has found that the Connecticut Constitution provides a broader right to an abortion than that provided by the U.S. Constitution.

But Republican State Chairman J.R. Romano said Lamont is trying to deflect attention from a state Democratic Party that has controlled the governor’s office, and most of the General Assembly, for the past seven-and-a-half years.

That period, Romano said, has been marked by repeated state budget deficits, tax hikes and a sluggish economy.

“I can understand why Ned Lamont wants to talk about other things,” the GOP chairman said. “He can’t talk about the utter failure that is the Connecticut Democratic Party.”

Larson also endorsed several other Democrats during his visit to the Capitol on Monday, including incumbent Secretary of the State Denise W. Merrill of Hartford and incumbent Comptroller Kevin P. Lembo of Guilford.

Though Connecticut’s congressmen haven’t always weighed in on the state underticket, Larson said, “I know so many of them personally and has worked alongside them often. Each one of them is going to play a significant role after the election.”