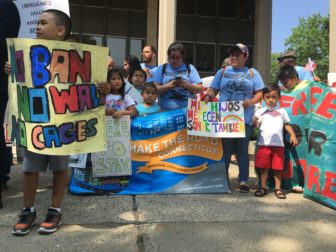 Protesters rally outside the U.S. District Court in Bridgeport on Wednesday before the hearing for the two children.

A federal judge on Wednesday delayed a decision on whether to reunite two children currently being held in Connecticut with their parents after they were separated at the U.S. border as a result of the Trump administration’s immigration policy.

The parents of the two plaintiffs, a nine-year-old Honduran boy identified as J.S.R. and a 14-year-old Salvadoran girl referred to as V.F.B., watched the hearing in blue jumpsuits via teleconference from a cinderblock room in a detention facility in Texas.

U.S. District Court Judge Victor A. Bolden’s decision to look more closely at the case came after testimony by Dr. Andres Martin, director of the psychiatric unit at Yale New Haven Children’s Hospital, who interviewed the two children. The children were not present at the hearing.

Marisol Orihuela, an attorney representing the children through Yale Law School, said the team of lawyers urged the reunification of the parents and children “in liberty and outside of custody immediately.” Orhuela stressed the court has the authority to grant the children immediate relief.

But Assistant U.S. Attorney Michelle McConaghy said the government is planning to transfer parents to two different facilities in Texas and the U.S. Department of Health and Human Services (HHS) will be bringing separated children there in waves to reunite families.

The hearing for the two children took place in the U.S. District Court in Bridgeport before a full courtroom, including immigrant rights protesters and activists.

The demonstrators gathered outside the courthouse before the hearing with signs and banners as they called for an end to family separations at the border and the immediate reunification of parents and children.

Martin described the process in which he and other doctors diagnosed the two children with “full blown acute PTSD” after the youth relayed a series of highly traumatic events they suffered even before being separated from their parents. 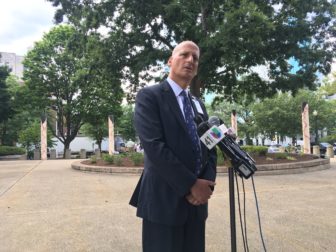 Martin said their symptoms include difficulty sleeping, depression, anxiety, and a lack of hope.

“My recommendation is for immediate reunification of the children with their parents,” Martin said. “Reunification should be in a place where they can have support, freedom, and the trappings of a normal life.”

The children’s lawyers said they believe these are the first lawsuits filed on behalf of immigrant children, noting other complaints have been submitted in the name of parents elsewhere in the U.S.

The lawsuits come as more than 2,000 children have been separated from their parents by immigration officials at the border this spring. The Trump administration later reversed its “zero tolerance” immigration policy amid widespread backlash.

Authorities began releasing reunited families from custody on Tuesday, fitting adults with ankle monitors to ensure they would later appear in court.

HHS officials say the number of separated children is now under 3,000, and about 100 of those youth are under age 5.

U.S. District Judge Dana Sabraw in San Diego ordered the department to reunite detained children under age 5 with their families by Tuesday, but the Trump administration did not meet that deadline and is now using DNA testing to match children with their parents. Sabraw also set a deadline for older children to be reunited with their parents by July 26.

In the Connecticut case, the boy referred to as J.S.R. fled with his father from Honduras after his grandparents were murdered and a body was left in the family’s backyard, according to the lawsuit. The complaint states the father and son were detained together at the border in June before the boy was separated from his father while he was sleeping.

The other lawsuit, regarding the girl known as V.F.B., states that she and her mother arrived in the U.S. after fleeing persecution in El Salvador.

“On the pretext of taking her to bathe, government officials lured V.F.B. away from her mother at a detention facility in Texas and transferred her to a shelter in Connecticut, thousands of miles from her mother,” the complaint said.

Another hearing on the case is scheduled for July 18.