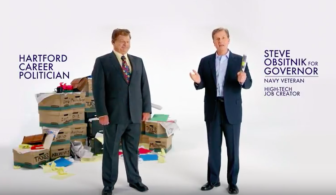 Unwilling to wait further for a long-delayed public financing grant, Republican gubernatorial candidate Steve Obsitnik is using $100,000 of his own money to begin a video advertising campaign on cable television and social media, his campaign said Thursday.

Once again, the State Elections Enforcement Commission on Thursday postponed action on Obsitnik’s application for a $1.35 million grant, but his campaign manager, Dan Debicella, said he was optimistic the commission would accept Obsitnik’s latest revised application next week.

“Despite today’s news the Obsitnik Campaign remains confident. We launched our first TV ad today with a six-figure media buy,” Debicella said. “We are confident in the approval of our grant in the very near future. We heard on Saturday that we were $700 short of the grant amounts, and submitted $3,800 in new donations on Monday.  This is now just a matter of processing time for the SEEC.”

During its Thursday meeting, the commission considered 58 applications for public financing under the state’s voluntary Citizens’ Election Program.

Only 15 of the applications were new; the other 43 were from campaigns that have been told to provide the commission with more information about their qualifying contributions, including five candidates facing primaries for statewide offices in mid-August: Obsitnik and four Democrats, Susan Bysiewicz for lieutenant governor, William Tong for attorney general and Shawn Wooden and Dita Bhargava for treasurer.

The commission voted to approve grants for Tong and Bysiewicz, but postponed action for both Wooden and Bhargava.

SEEC Executive Director Michael Brandi would not comment Thursday on the status of specific applications, but he said in a statement that the reason most committees have not yet been awarded grants is because their applications did not meet the thresholds required— in that either the number of in-district or in-state contributions is not met or the dollar amount is less than required.

He did say, however, for larger, more voluminous applications or with committees not in the primaries, the Commission may have not yet vetted the applications because “staff ran out of time by the meeting deadline and could not in good faith recommend to the commission that the grants be approved, for any number of reasons.”

To obtain the grants, which range from $28,500 for a state House race and $6.5 million for a major-party gubernatorial candidate in November, the candidates must show public support by collecting small-dollar contributions. The public grants for a statewide primary are $1.35 million for governor and $406,275 for under ticket campaigns.

Tong said some of his donors are lawyers who, as equity partners in law firms, listed themselves as self-employed, which was unacceptable to a commission responsible for enforcing a law that bans contributions from state contracts. Another issue, he believes, was that some of his Chinese immigrant donors used Americanized  first names that might not be their legal names.

“I think every campaign, obviously, wants access to funds to run their campaign as soon as possible. We obviously would have preferred not to have any delay, but we are fully compliant with SEEC. They gave us a list of questions, and we answered them,” Tong said. “I think we are still very much on track with respect to our plans in this primary.”

Tong’s competitors for the Democratic nomination, Paul Doyle and Chris Mattei, won approval of their grants on June 27. Unlike Obsitnik, whose four competitors already are running television ads, Tong won the endorsement at the Democratic state convention and will appear on the top line of the ballot on primary day on Aug. 14.

Obsitnik is one of three Republican gubernatorial candidates participating in the Citizens’ Election Program. The others, Mark Boughton and Timothy Herbst, were approved for their grants on June 20, as was Joe Markley, a Republican candidate for lieutenant governor.

Democrat Eva Bermudez Zimmerman, who is challenging the convention-endorsed Bysiewicz for lieutenant governor, recently filed her application, but was not on Thursday’s agenda. The same is true of Jayme Stevenson, a Republican challenging Markley.

New Britain Mayor Erin Stewart, who ended her gubernatorial run on the eve of the GOP convention in May to open a campaign for lieutenant governor, reported Tuesday having raised only $44,355 of the $75,000 a candidate for that office needs to qualify for public financing. Her campaign spokeswoman said a decision most likely would be made next week about whether to consider the qualification effort.

Under state law, the commission cannot provide grants for primaries after July 27.

The commission is willing to act on his application once it resolves the legitimacy of the qualifying contributions, even as the FixCT inquiry continues.

“It’s a private matter with them,” Obsitnik said of the commission. “We’ve answered every question, I believe, to their satisfaction. I don’t think there’s anything to these investigations. I think they’ll come to the same conclusion.”

If Obsitnik’s application is approved, he could be reimbursed for the $100,000 he is spending on his initial ad buy. His spot, produced by Convergence Media, tries to cut through the clutter of commercials with an offbeat ad pitting him against a buffoonish character, Hartford Career Politician.

Alyssa Hurlbut contributed to this story.

Connecticut's seven-day positivity rate peaked 10 days ago at 5.8% and fell to 4.7% on Monday.

Who is more deceitful, the pretender President or his Republican enablers?

CT ViewpointsCT Artpoints
Opinion Who is more deceitful, the pretender President or his Republican enablers?

Opinion Time to flatten the curve, once again

Throughout the COVID pandemic, critical care teams have stood as the last line of defense for patients when all other measures have failed. With cases again surging in Connecticut, we are once again seeing signs that this line of defense is threatened. For this reason, more than 40 other critical care physicians and I sent a letter to Gov. Lamont expressing our grave concerns that the capacity of our intensive care units (ICUs) is becoming saturated.