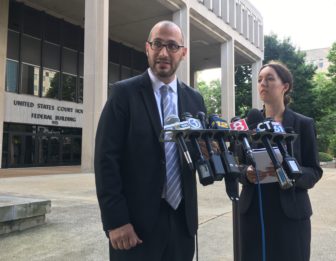 A federal judge ordered the government to bring the parents of two immigrant children currently being held in Connecticut to a court hearing in Bridgeport next week, after finding that their separation at the U.S. border was unconstitutional.

U.S. District Court Judge Victor A. Bolden ruled Friday that the separation violates the children’s due process rights. His decision came two days after the initial hearing on the case.

The children’s parents watched those proceedings via teleconference from a detention facility in Texas, but the youth were not present.

Attorneys at Connecticut Legal Services and the Worker and Immigrant Rights Advocacy Clinic at Yale Law School filed the federal lawsuits on behalf of a nine-year-old Honduran boy identified as J.S.R and a 14-year-old Salvadoran girl referred to as V.F.B.

Saturday, attorneys for the children hailed the judge’s decision as “the first ruling in the country to find that the government’s cruel and illegal family separation scheme violates the constitutional rights of children, and not just parents.”

Connecticut Legal Services Deputy Director Josh Perry said the question now becomes how quickly the children will be released and safely reunited with their parents in the community.

“This fight isn’t over, and it won’t be over until they are reunited at liberty with their parents,” Perry said in a statement on Saturday.

Assistant U.S. Attorney Michelle McConaghy did not immediately respond to a request for comment Saturday.

Dr. Andres Martin, director of the psychiatric unit at Yale New Haven Children’s Hospital, testified on Wednesday that he and other doctors diagnosed the two children with “full blown acute PTSD.” Martin said their symptoms include difficulty sleeping, depression, anxiety, and a lack of hope.

Bolden ordered the government to bring the children’s parents to Connecticut for a July 18 status conference, and provide daily video conferencing between the children and their parents in the intervening days.

The judge also ordered each party in the case to present a plan during the July 18 meeting to address the children’s trauma.

“Judge Bolden’s ruling acknowledges the deep harm that the government inflicted on V.F.B. and J.S.R. by forcibly separating them from their parents,” said Hannah Schoen, an intern with the Worker and Immigrant Rights Advocacy Clinic at Yale Law School.

The order comes on the heels of an acknowledgment that more than 2,000 children have been separated from their parents by immigration officials at the border this spring. The Trump administration later reversed its “zero tolerance” immigration policy amid widespread backlash.

In the Connecticut case, the complaint states J.S.R. and his father were detained together at the border in June before the boy was separated from his father while he was sleeping.

The other lawsuit, regarding the girl known V.F.B., states that officials separated her from her mother at a detention facility in Texas “on the pretext of taking her to bathe.”