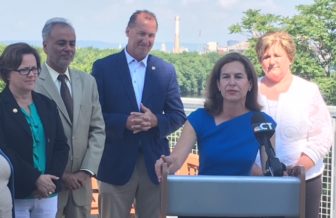 East Hartford — The carefully calibrated campaign of Susan Bysiewicz was on display Monday on a third-floor balcony overlooking the Connecticut River. A half-dozen elected officials sang the praises of Bysiewicz, all while studiously avoiding criticism or even a mention of the young labor organizer opposing her in the Democratic primary for lieutenant governor.

Bysiewicz is facing Eva Bermudez Zimmerman, a candidate she is trying to defeat without insult or bruised feelings, a recognition that the minority and union activists backing Zimmerman are crucial elements of a coalition Democrats need to win in November. Zimmerman is both a flesh-and-blood candidate, and a symbol for a party grappling with identity politics.

It’s not the challenge Bysiewicz imagined when she exited the race for governor and accepted Ned Lamont’s invitation to be his running mate, a partnership calculated to unite the party around a Lamont-Bysiewicz ticket, sparing Democrats the raucous five-way gubernatorial primary facing Republicans.

But Lamont had raised expectations he would break new ground in his choice of a running mate by choosing a black or Hispanic candidate who might help mobilize the Democrats’ urban voters in a toss-up gubernatorial race. The back-lash was swift: Forty-percent of the state convention delegates backed Zimmerman, a candidate then for all of two days.

So, Bysiewicz, 56, a three-term legislator and three-term secretary of the state, is running a race that is about more than the qualifications of Bysiewicz, who disastrously shied away from a run for governor in 2010, and the 31-year-old Zimmerman, an SEIU staffer who has never won elective office.

But on Monday, Bysiewicz tried to steer the campaign to safer ground by raising the issue of who is ready to become governor, a reminder that the office of lieutenant governor has few constitutional responsibilities beyond presiding over the state Senate — but only if nothing happens to the governor. Connecticut’s recent history is marked by governors who departed office for reasons of scandal, poor health, or higher office.

“I’d say that between 1945 and 2004, six lieutenant governors have had the opportunity to step up and be governor,” Bysiewicz said in a press conference at Goodwin College. “The voters, I think, understand the magnitude of this decision. That’s why I feel very strongly that we have a strong opportunity.”

Bysiewicz is a curious figure in Connecticut politics.

In 2010, she was the early frontrunner in the open race for governor, but opted instead to declare for attorney general after U.S. Sen. Chris Dodd announced his retirement and Attorney General Richard Blumenthal ran to succeed him. In a question eventually resolved by the state Supreme Court, Bysiewicz was found to be lacking the statutory requirements to be attorney general, including 10 years of legal practice in Connecticut, with litigation experience.

Bysiewicz then ran for U.S. Senate in 2012, losing in a primary to Chris Murphy. She flirted with running for state Senate in 2014 from a seat centered in Bristol, even though she lives in Middletown.

East Hartford Mayor Marcia Leclerc came closest Monday to identifying Zimmerman’s union connections, a significant asset in a primary, as an issue Republicans might use against the ticket in the fall. But she only hinted at Zimmerman’s union background, never mentioning her or the SEIU.

Bysiewicz took pains to avoid criticism of either Zimmerman or unions, saying blandly that Democratic voters will decide who best has a chance to win and serve.

“I think the voters will have the opportunity to look at the background and life experience that each candidate brings,” Bysiewicz said. “I am not a labor organizer. I’ve been supportive of labor and working families, for sure. That’s not what I bring. But that’s why primaries can be a positive thing. The voters will get to make a choice as to what kind of background they are looking for in whoever the next lieutenant governor may be.”

Zimmerman, who could not be reached Monday, has said she would be ready to lead, relying on a broad circle of other Democrats.