What is a governor worth to a state party in terms of campaign cash? In the case of Gov. Dannel P. Malloy and the Connecticut Democrats, the answer at this point in the election cycle lies somewhere in the neighborhood of $1.4 million.

Without an incumbent governor seeking re-election, individual contributions to the Democratic Party are down 58 percent from four years ago, when Malloy was a candidate seeking every possible advantage in a tough fight for a second term. Conversely, with Malloy as rainmaker in 2014, the party saw a 62 percent increase in individual contributions over 2010.

The numbers are a reflection of one of the oldest and most enduring dynamics in politics: Even in an era of so-called clean elections in Connecticut, when state contractors are barred from contributing directly to state campaigns, money will still find its way to power.

The arrival and pending departure of Malloy, whose fundraising on behalf of the party for the 2014 election sparked a Republican complaint that led to Democrats paying the largest penalty ever obtained by the State Elections Enforcement Commission, offer a measure of that dynamic.

Party finances are tabulated by the Federal Election Commission in two-year election cycles, with the current calendar beginning Jan. 1, 2017.  An examination of FEC records shows that:

It wasn’t supposed to be this way in Connecticut, a state that made a concerted effort in 2005 to loosen the ties between political power and campaign cash in the wake of a corruption scandal that forced the resignation of Republican Gov. John G. Rowland.

At the urging of his GOP successor, Gov. M. Jodi Rell, the General Assembly passed a law banning state contractors from contributing to state campaigns. The provision was an element of a broader reform in 2005 that created the Citizens’ Election Program, a voluntary system of publicly financing campaigns of candidates for state office.

Rowland resigned amid an impeachment inquiry into, among other things, his administration’s cozy relationship with William A. Tomasso, a state contractor whose family’s companies won more than $100 million in state contracts while Rowland was governor. Rowland pleaded guilty to a corruption charge related to a bid-rigging conspiracy. 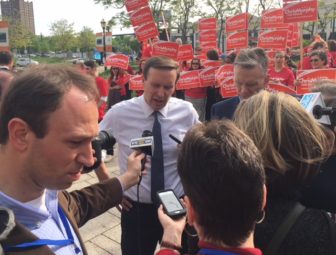 Chris Murphy talking to reporters outside the state convention. He is now the party’s rainmaker.

Federal law requires that money raised and spent in support of congressional candidates — even if the expenditures also benefit state candidates on the same ballot — be done so under federal rules. As a result, as Jonathan Harris said when he was the party’s executive director in 2013: “The federal account is our workhorse account. We run our operations, our salaries, our rent on federal dollars.”

In 2013 and 2014, contributions from state contractors flowed into the party’s federal account, many for the maximum of $10,000. Republicans alleged that much of the money was raised specifically to benefit Malloy, not a broader get-out-the-vote effort on behalf of the party’s entire ticket that included its congressional candidates.

The complaint produced a bitter fight over the authority of the State Elections Enforcement Commission to compel the Democrats to disclose emails and other documents pertaining to the party’s fundraising. Without resolving the dispute over the commission’s subpoena authority, Democrats agreed to pay $325,000 to settle the case, not admitting wrongdoing.

The reformers who pushed for the creation of the Citizens’ Election Program say it has made positive contributions to how Connecticut elections are financed, despite the continued flow of money from state contractors and others with a financial interest in issues before the governor and General Assembly.

The public financing law was passed in 2005, but 2010 was the first year the money was available to candidates in statewide campaigns. (The program is available only to state offices, not congressional campaigns.) Malloy was the first gubernatorial candidate to qualify and be elected using the program.

Rell seemed averse to pressing for contributions for the GOP in 2005, when she was preparing for the 2006 campaign. She refused to meet with lobbyists, and undercut a longstanding GOP fundraising golf tournament, the Governor’s Cup. With lobbyists in attendance, Rell refused to attend.

William A. Hamzy, who was Republican state chairman when she was preparing for a re-election campaign in 2006, said Rell never was a significant fundraiser for the party.

“It certainly was a different time,” Hamzy said.

Hamzy said the public financing system has made the state parties more important today than they were in Rell’s time. Public financing tends to level the playing field if an incumbent governor  is participating in the program, as did Malloy and his Republican challenger, Tom Foley, in 2014. Both campaigns were limited in the general election to identical grants of $6.5 million.

Given that limit, the ability of the state parties to essentially supplement the grants by footing the bill for a get-out-the-vote effort has become more important, Hamzy said. Unlike Super PACS, which are free to make unlimited expenditures in support of a campaign, the state parties are allowed under state law to coordinate activities with campaigns.

In 2014, the ground game established by the state Democratic Party gave Malloy an edge, one that Republicans still insist was improper.

The public financing program was pushed by a coalition of grass-roots groups, including Common Cause and the Connecticut Citizens Action Group. The groups’ maintain that the reforms of 2005 have had a positive effect on state elections, encouraging newcomers to run for office and dampening the impact of special interest money, even if it cannot be eliminated.

Nick Nyhart, a long-time Connecticut activist who is president of the Every Voice Center, a national reform group, said the Citizens’ Election Program clearly has lessened the dependence of public officials in Connecticut on outside money.

“It cuts the dependence of candidates, whose job is to serve the public, on the donors who have very specific interests,” Nyhart said. “In Connecticut, every dollar raised from outside sources is a dollar that raises that dependency question.”

Nick Balletto, the Democratic state chairman, acknowledged that fundraising is off but said the party’s major fundraising dinner won’t be held until October, when it might close the gap

Still, he said, “We don’t have the full-scale operations that we’ve had in the past.”

The Democrats are hardly destitute without Malloy as a rainmaker, however.

Their presumptive gubernatorial nominee is Ned Lamont, a wealthy self-funder free of the spending limits Malloy faced as a participant in the Citizens’ Election Program. And it has U.S. Sen. Chris Murphy, whose re-election campaign was holding nearly $8 million at the beginning of April.

Murphy said he is committed to helping underwrite a coordinated campaign to identify and turn out voters on behalf of the entire ticket.

Murphy’s campaign already has transferred nearly $300,000 to the party’s coffers.

“I’m hopeful we’ll be able to run a really well-coordinated campaign as allowed by law, where we are coordinating efforts between my campaign, the governor campaign, the legislative  campaigns to target voters and get out the vote,” Murphy said. “We’ve traditionally done that in the past, and I’d like to do it better this year.”

The Democratic Party’s settlement with the State Elections Enforcement Commission lays out new accounting rules and other restrictions intended to keep campaign money prohibited by state law out of state campaigns. J.R. Romano, the Republican state chairman, said the GOP will be closely watching.