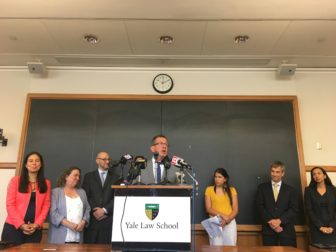 Attorneys representing two immigrant children who were reunited with their parents in Connecticut said Tuesday they hope the cases serve as a model for potential lawsuits by other families separated at the U.S.-Mexico border under the Trump administration’s zero-tolerance immigration policy.

Gov. Dannel P. Malloy joined the team of lawyers from Connecticut Legal Services and the Worker and Immigrant Rights Advocacy clinic at Yale Law School to laud the Monday reunification of the two families after a fleeting, two-week court battle.

The governor said the office in charge of processing refugee status cases at the border has been purposefully understaffed and frequently closed to undermine efforts by immigrant families to successfully navigate the process.

“This is a government that has made it impossible, or nearly impossible, for thousands of individuals to seek that status and then blames them for not having that status,” Malloy said.

Yale Law School Professor Muneer Ahmad said the attorneys believe they were successful because of the collaboration on the pair of federal lawsuits, noting that process can be replicated across the country.

John Fitzgerald of the U.S. Attorney’s Office for the District of Connecticut said the office does not comment on ongoing litigation.

The families were reunited just a few days after U.S. District Court Judge Victor A. Bolden ruled that the separations were unconstitutional.

The reunification of the nine-year-old Honduran boy identified as J.S.R. with his father, and the 14-year-old referred to as V.F.B. with her mother, come amid the government’s scramble to reunite more than 2,000 children ages 5 and older with their families by a federal judge’s July 26 deadline.

The attorneys would not comment on where the families were staying, but Ahmad said the lawyers are in the process of securing counsel for their deportation cases.

Marisol Orihuela, a Yale professor working on the case, said the government initially transported the parents from Texas to Connecticut without telling them they were going to be reunited with their children and released from detention.

Ahmad said the parents were not fitted with ankle monitors, but must stay in New England  and appear for regular check-ins with U.S. Immigration and Customs Enforcement (ICE) authorities. Attorneys for the children had a teleconference with Bolden and the government on Tuesday ahead of a potential hearing on Wednesday.

Meanwhile, the reunification of more than 2,000 immigrant children with their parents faces a number of obstacles.

To expedite matters, the Trump administration has changed its procedures to use methods other than DNA testing to verify parentage for these children.

But Sen. Richard Blumenthal, D-Conn., is skeptical that the administration will be able to reunite all the families before a court-imposed July 26 deadline.

Blumenthal, a member of the Senate Judiciary Committee, was briefed Tuesday with other panel members on the family reunifications by officials of the Department of Justice, Department of Homeland Security and Department of Health and Human Services on Tuesday.

“They were very unclear on what’s going to happen to these children,” Blumenthal said.

California U.S. District Judge Dana Sabraw, the same judge who ordered the family reunifications, has also ordered the Trump administration to stop deporting immigrants. But his order expires on July 23 and Blumenthal is concerned many of the children’s parents will be deported before the families are reunited.

“After this briefing, there are still too many unanswered questions—and far too little recognition that the current chaos is a crisis of the administration’s own making,” Blumenthal said.

Blumenthal, and other Democrats, have asked Senate Judiciary Committee Charles Grassley, R-Iowa, to hold hearings on the Trump administration policy that led to separation of immigrant children from their families.